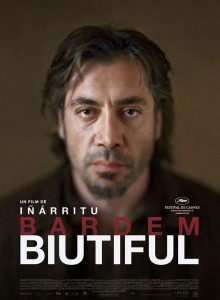 Biutiful is a wonderful follow up to Babel from Alejandro González Iñárritu and features another fantastic performance from the always great Javier Bardem.

Bardem plays Uxbal who is a middle man of sorts between a number of shady enterprises and his life quickly becomes more complicated after a visit to the doctor.  Separated from his wife, Uxbal takes care of his two kids and is always doing whatever he can to keep his family afloat.   Uxbal is always juggling the trusts and protection of a group of Senegal immigrants who are street dealers, a Chinese man who runs a sweat shop, the police, and a construction developer as he constantly spreads himself thin prowling the streets.

I went into this film knowing pretty much nothing about the film other then Bardem was apparently great and that the town is a tad depressing.  I will agree with the greatness of Bardem but the tone of the film isn’t as dreary as a lot of people are making it out to be.  I will say though that you should go into the film with as little information as I did as the film is a joy to watch unfold under the skillful hand of Iñárritu.  The films first act slowly reveals the film’s players around Uxbal and Iñárritu skillfully gives us the pieces to put everything together and makes you reassess the moments you saw before it.

It’s a certain element of the film that I will not spoil though that allows the director to really do some interesting things with the film.  The way Iñárritu uses mirrors, focus, and shadows in the film is really incredible and keeps you always checking for little clues subtly being dropped away from your attention.  The films structure is also a sort of Babel light format in that there are intertwining sets of characters but unlike Iñárritu’s previous film Uxbal is a through line to all elements of the story.  The story is Uxbal’s though and the surrounding people, while compelling in their own right, are there to service Uxbal’s journey over the course of the film.  The side characters could have been a tad deeper but the film would have become far too bloated if we stayed much longer with those characters.

Still, Uxbal and his family provide plenty of interesting and engaging character moments that will be sure to grip you from nearly start to finish.  The film does sag just a tad at the beginning of the third act but quickly pulls you back in as the inevitable for Uxbal can no longer be avoided.  The way Iñárritu calls back the opening two scenes of the film is a wonderful little twist as well and I never would have thought how we ended up in those scenes would be the path the film takes.

Bardem is getting almost all of the attention on this film and I think it is about time to give him some dues for his great work here.  Iñárritu guides Bardem through this dark path Uxbal takes and sprinkles it with some great moments between Uxbal and his kids.  Their relationship is the heart of the film and why we can root for Uxbal as he does some things that might be considered deplorable.  Bardem nails the physical and emotional hurdles that Uxbal must over come and he is more than worthy of all the praise he is getting.  Maricel Álvarez is also quite the marvel on the screen as she plays the ex/wife of Uxbal which allows her to really show of her range.  Hanaa Bouchaib and Guillermo Estrella play the children in the film and both go toe to toe with the parentals in the picture.  The supporting cast is full of a bunch of unfamiliar faces to American audiences but Iñárritu gets the most out of his diverse cast with no one proving to be a weak link in the armor.

In the end, Biutiful is a fantastic film from Iñárritu.  It is a film that keeps you thinking and stays with you after you leave the theater.  The more and more I think back on this film the more I like it and I really can’t wait to see it again.  At two and a half hours it might run a tad long but I really can’t think of any other complaints with the film.  Wonderfully acted and expertly crafted by Iñárritu the film is one of my favorites of 2010 and one I don’t think you should miss.

Biutiful is an A