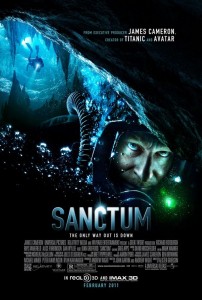 This cave diving thriller is based on a true story and while it is full of plenty of beautiful shots and alright set pieces there are way too many shortcomings/failures to overcome.

The film follows a team of scientists who are studying the largest cave system in the world and are trying to find a path to the ocean.  Led by cave diver extraordinaire, Frank McGuire, his Aussie team is funded by a rich American explorer type, Carl Hurley.  When Carl and his girlfriend show up to the site they are barely a step ahead of an incoming storm.  Frank and his team are getting ready to head back topside to avoid the flooding when the storm changes course leading to the team, Carl, and his girlfriend, Victoria, being trapped in the cave.  The only way out for the team is deeper into the cave with the hope of finding a path to the ocean.

They are throwing around James Cameron’s name a lot on this picture’s advertisements and please don’t be fooled into thinking this is a James Cameron film.  Now Cameron’s interests are inherit in this film in that he is an explorer type, I can see Cameron probably loving to do this cave diving stuff, and that the film was shot in 3-D.  These elements of the film are easily two of its strong suits as the native 3D here continues to show that the medium can add something to the experience, especially when shot with the right materials.  As for the cave diving aspects of the film, these moments are often quite stunning with some amazing views of some scenery most people have never experienced.

From here that is about where the accolades of the film begin to falter.

First, the whole based on a true story hook was based on the facts that yes a team of divers got trapped and they were all saved without much incident.  This is obviously not that story.  I do think the set designers and set builders deserve a lot of credit for creating some truly fantastic sets that blend seamlessly with the location footage that they shot.  The script for the film is simply horrendous though and is as clichéd and full of such uninspired characters and dialogue that one can find very little to grasp on to.  The film’s best actor, Richard Roxburgh, is capable of overcoming most of his characters shortcomings and dialogue but none of the other actors are fortunate enough, nor talented enough, to make anything of their characters.

The films action beats are at least surprising for the first two thirds of the film are so, mostly due to the fact that the setting is completely foreign to most everyone, but the films third act dives deep (pun unintended) into cliché and I couldn’t help but role my eyes.  Throw in the stereotypical coming of age/father-son story and you got yourself a batch of a whole lot of familiar.

As I mentioned above, cast wise no one really excels with only a couple of the actors managing to be adequate.  Granted, the awful dialogue was sure to blame a lot of the time here but no one really helped the material elevate.  Roxburgh is the most seasoned and skilled veteran here and he does a fine job of making Frank the most interesting and compelling character in the film.  One of Frank’s teammates, George, is played rather well by Dan Wyllie and he gives the film a bit of comic relief and is able to sell some of the awful attempts at humor.  Alice Parkinson is easy on the eyes and doesn’t stink up the joint, but isn’t able to elevate the material by any means either.  Ioan Gruffudd has some laughable moments, again the script doesn’t help, but he seems to be constantly trying to out act those around him.  The real lead of the film is also laid in the hands of the young Rhys Wakefield and he clearly isn’t capable of carrying the film.

In the end, Sanctum would have probably been better served by being a documentary on cave exploration.  The drama would be real, we would still get the same great imagery, and Cameron could have directed and shot in 3D.  Instead we get a mediocre thriller that has decent thrills and awful just about everything else.  The 3D is very well executed though but you should by no means be checking this out for the 3D.  If you are still interested you should wait to rent, but if you are really freaked out by the scenario then you might get a rush out of it; just don’t say I didn’t warn you.

Sanctum is a D