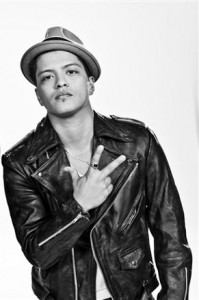 So, what do you do when you are currently one of the recording industry’s hottest artist? Well, lots of blow of course!

Bruno Mars, aka Peter Hernandez (I can see why he changed his name..) was arrested in Las Vegas last September at the Hard Rock hotel after an attended alerted security to the singer having cocaine on him. The Grammy nominated artist was promptly arrested for a felony possession of cocaine.  Mars was found with 2.6 grams of the illegal substance on him, and despite the evidence he told police he hadn’t done drugs before. This is pretty much the same as having a son who has a hard drive full of gay porn, but swears up and down that he is straight. No one is buying it.

It seems that Mars and his legal team understand that no one is buying it either. The singer accepted a plea deal today that fines him $2,000, a year of drug counseling, and 200 hours of community service. If he had fought the plea and lost, he was facing four years in prison. Now part of the condition of the plea is that the charge is wiped off of his record if he doesn’t have another incident in the next year. If he does for some reason decide to risk his millions of dollars he’ll most likely be serving the four years he’d be facing without the plea.

Although, let’s be honest people. He’s a rich and talented performer, and his star is rising even more quickly within the industry. Do any of you actually think he’ll be given a harsh sentence on anything? I’m pretty sure he could publically flog one of the Glee actors for messing with his songs, and the court system and the media would be like, “It was just a misunderstanding.”

So, just remember if you want to live a life a crime, make sure you are incredibly talented and/or rich first.

Let us know what you think in the comments below!