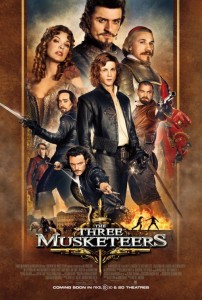 A lot of critics and fans hate on Paul W.S. Anderson, the director of this re-imagining of the classic tale “The Three Musketeers”.  I am not one of those people and will, in fact, defend his films since I have found most of them quite enjoyable.  “Mortal Kombat” was going to be tough to make regardless of who directed it, but I think Anderson took a general story and captured some pretty interesting characters with great fight scenes.  “Resident Evil” is a fun zombie, action film that provides fans with something a little different from the source material.  Yes, “AVP: Alien vs. Predator” could have been better, but outside of the queen alien/ t-rex climax, I think it’s a pretty fun mash up of the two franchises.  Anderson will never win an Oscar or have groundbreaking scripts and dialogue, but he makes entertaining films that take you on a fun 90 minute ride.

I am glad I got that out of the way because you now know that my next statement has nothing to do with my past feelings regarding the director.  “The Three Musketeers” is a bad movie.  While I usually find at least a tad of entertainment value in his films, Anderson succeeded in, for the first time, creating a movie I did not find amusing, exciting, or fun.

“The Three Musketeers” is the tale of young D’Artagnan leaving home to follow in his father’s footsteps in becoming a Musketeer.  The problem is that the Musketeers have become obsolete due to the rise of Cardinal Richelieu and his army of officers.  But fear not, the Musketeers will rise to save the day when a political overthrow seems to be approaching.  A plot involving double agents, secret affairs, and missing diamonds is thrust into motion with D’Artagnan having to prove if he has what it takes to be a Musketeer.

In his past films, Anderson has created his own worlds that I have bought into.  But the catch is that all of these worlds have a believability to them to an extent.  This is the biggest problem with doing alternate reality films.  You would think that studios would have learned after “Wild Wild West”.  Obviously not.  Aside from one character, who I will get to, no one in this film feels like they belong,  Part of this is due to the dialogue which is atrocious no matter what time period these characters are in.  The one liners here are so out of place that it only takes you out of whatever world is trying to be established.

While normally not a problem, I feel like Anderson missed the mark on the action set pieces.  I love a good sword fight, but there were none here.  Just when I was starting to enjoy a particular fight, the films cut from one angle to another in quick succession leaving me trying to piece together the action of the fight quickly before I pick back up.  Then, on the opposite end of the editing spectrum, we are given constant slow motion sequences which I assume were to benefit the 3D, but watching at home in non 3D just leaves it looking awkward in most cases.

I do have one good thing to say about the film.  Mads Mikkelsen fits in the time period and in character.  He should have been more of a focus for the villain rather than splitting time between Orlando Bloom, who may be the worst villain in any action film, and Christoph Waltz, who never feels very menacing.  Mikkelsen continues to impress me, even in bad films.  Like most people, I first saw him in “Casino Royale”.  Since then I have been very impressed seeing him in “Valhalla Rising” and “Clash of the Titans”, another film I did not enjoy but liked him.

I can’t even suggest to rent this film.  Especially when there are far better action adventure films out there that will entertain you much more.  This would have to be the first Paul W.S. Anderson film that I have hated.  Though I am not ready to join the bandwagon of hatred toward him, I will be a little more skeptical with his next project. 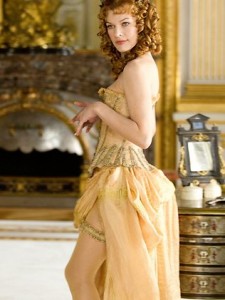 Access: Three Musketeers – While watching the movie, gain access to cast and crew stories, insider information about the making of the film and more.