Blu-Ray Review: “The Adventures of Tintin: The Secret of the Unicorn” 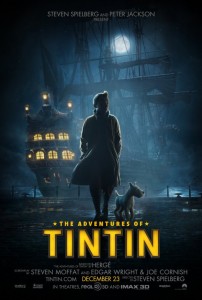 For me, “The Adventures of Tintin” couldn’t fail.  The talent and source material was just too great.  I had been familiar with the character due to my brother.  He watched the tv series that aired on HBO in the early ’90s.  I knew he was a young twenty something journalist who had adventures involving mysteries and treasure. My knowledge on Tintin did not extend much further.  When the movie was announced with Peter Jackson and Steven Spielberg at the helm, the film couldn’t come soon enough.  “The Adventures of Tintin: The Secret of the Unicorn” is every bit the adventure roller coaster ride that I wanted it to be and it plays just as well at home as it did in theaters.

Tintin is thrust into the a plot of revenge and hidden trailer when he buys an antique model ship.  Sakharine wants the ship for himself for his own devious plans.  Tintin sets out to discover why this ship is so important.  Along the way, he meets up with Captain Haddock.  The story takes the two across the sea through the desert and through the skies to track down the secrets of the Unicorn.

When the movie first hit theaters, I read review after review comparing this to “Raiders of the Lost Ark”.  I couldn’t agree with them more.  “Tintin” is a roller coaster ride from beginning to end that left me not wanting it to end.  The action set pieces are perfectly choreographed, as highlighted by one of the best moments in all of film last year.  The chase through Bagghar that concludes the second act feels like a classic scene stolen right from Indiana Jones.  Even if you don’t enjoy the rest of the film (you’re crazy), you can’t deny that the sequence is breathtaking.

It is disappointing that North American audiences didn’t embrace Tintin like I wish they would.  He is a phenomenon overseas so, thankfully, those ticket sales will allow Peter Jackson to direct the sequel.  My hope is that a larger audience will discover this at home.  I think it is the best family action film of last year and would have been my pick for best animated feature.  But, as demonstrated in the past, the Academy doesn’t like motion capture which resulted in this film being robbed of a nomination.