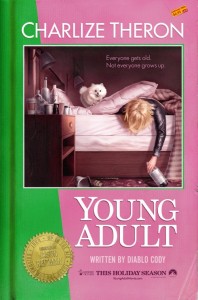 There are few directors who I can say that I eagerly anticipate their upcoming movies due to the fact that their track record has proven that I can have faith in them turning in a solid flick.  Christopher Nolan is definitely one of these people.  For me, he just hasn’t made a bad movie.  Jason Reitman joined Nolan in this category last night.  “Thank You For Smoking”, “Juno”, and “Up in the Air” were all films that I thoroughly enjoyed and rewatch frequently.  My suspicion though was that all of these films had very likeable lead actors in Aaron Eckhart, Ellen Page, and George Clooney, and these actors were part of the reason I connected with the films so much.  I watched “Young Adult” for the first time last night, and while Charlize Theron’s Mavis is far from likeable, I was able to connect to the character in a way that made the film extremely enjoyable.  Reitman is now 4 for 4 on feature length films.

Mavis is a writer of, according to her, a wildly popular young adult book series.  She is unhappy.  Trying to seek what she is missing through men each night and whatever bottle of alcohol is in front of her.  One morning, while postponing writing her newest novel, she receives an e-mail from an old high school flame, Buddy, announcing he just had a baby girl.  Mavis decides that Buddy and her are destined to be together, and she’s not going to let” silly” things like his marriage and child get in the way.  Once back in her small town, she meets Matt Freehauf, a former high school classmate, who strongly advises her against her plan of action.  Can Mavis see the error in her ways before destroying herself?

The problem with the internet is that nothing is no longer a surprise.  Now, you can say “Well Tim, just don’t read anything on the internet about the movies you want to see”.  And I will tell you “Does a moth not fly towards the flame?”.  I mention this because I read article after article praising both Charlize Theron and Patton Oswalt in this film.  More and more praise and chatter came after neither secured an Oscar nomination with many citing that it was one of the Academy’s biggest oversights.  Well, believe what you read.  Theron and Oswalt make this film what it is.  With a lesser actress, the viewer would never be able to see a little bit about themselves in Mavis.  Theron plays the part to perfection.  The bitch.  The slut.  The pathetic loser stuck in the past.  The alcoholic.  All characters that most would never want to say that they relate to, but I find it hard to believe that you would watch the film and not.

While Theron is outstanding, Patton Oswalt is the real gem for me.  I have never given Oswalt a second look.  Outside of “Ratatouille”, I have never seen a film the actor has starred in.  And looking at his IMDB page, the actor is busy.  Oswalt delivers one of the best performances of last year.  Yes, you feel sorry for his character, but I never had the feeling that he felt sorry for himself.  He is someone that everyone had in high school.  That person that got overlooked by everybody, but if you got down to it, you would want to be friends with him.  Yeah, he is a jerk sometimes, especially one particular scene where he makes fun of a fellow cripple, but no one in any of Reitman’s films are perfect.  Because they are all real people.

The story is what hooked me in, more than the performance.  I personally have some of the problems that Mavis has, not nearly to the same extent, but I think it’s also an issue that everyone deals with from time to time.  A concept that “Midnight in Paris” also covered last year.  The past is always so much better than the present.  We all look back from time to time and think that we had it better back whenever, and our lives would be so much better if we lived in that time period or we were with that person.  It’s a slippery slope, as we can see with Mavis.  But sometimes we just need to take off the rose colored glasses while looking at the past.

“Youn Adult” wouldn’t be in my top ten of last year, but it will definitely be a film I reflect back on and revisit in the future.  For me, that’s what makes a great film.  And that’s what makes Reitman’s films great.  He tells real stories about real problems that people have.  Sometimes it’s not fun to watch, like this film at times.  It can be depressing.  But I don’t always want to watch stories about hobbits with rings and billionaires in capes and cowls.  Sometimes you need to watch the films about real life that will gut punch you.  A film that makes you look at yourself.  A film that causes you to want to change even when not all of the characters on screen want to change.