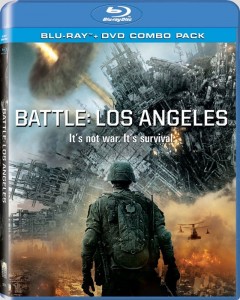 Battle: Los Angeles tells the story of an alien invasion through the eyes of a small group of Marines. The film follows this platoon from first contact to the decisive turn in battle. Unfortunately, it does this with as many cliches and hammy plot turns as it can muster. The film it not completely flawed however. The cinematography is often stunning, the battle sequences are engaging and the visual effects are striking. While those qualities may seem like all that’s necessary for an action flick, you’ll notice that there is no mention of character, plot or dialogue. All of which, Battle: Los Angeles seriously lacks.

In regard to it’s weakest point, character, Battle: Los Angeles seems to have confused archetypes with stereotypes. Battle: Los Angeles showcases the grizzled veteran, one day away from retirement, the new officer, fresh out of school and lacking experience. It even has a couple brave civilians who do their part for the war effort. In fact, at many times Battle: Los Angeles feels more like a Marine recruitment film than a Hollywood movie, I suppose it could be both. For a popcorn movie, Battle: Los Angeles fits the bill, but if you’re looking for any new insight or a compelling story, look elsewhere.

As stated before, the visuals are terrific and Blu-Ray does them justice. When the shaky cam stops shaking long enough to take in the visual feast, contrast and detail look wonderful. Black levels are inky, allowing shadows and dark scenes to remain clear and well delineated. Bright scenes shine with explosive pops of color and high levels of detail.

As with the video quality, the audio is top notch. Battle: Los Angeles uses every speaker in your setup to fill your room with resonant bass and sharp, piercing bullet sounds. Dialogue is usually well separated, but occasionally gets lost in the myriad of other sounds. Battle: Los Angeles sounds as good as you would want it to.

–Worth Somebody Else’s Money-