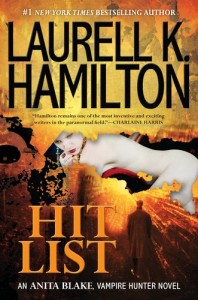 Hit List is the 20th book in the Anita Blake  series written by Laurell K. Hamilton. Anita is a vampire executioner and U.S. Federal Marshall. In this book, she is hunting a serial killer who is slicing apart Weretigers. Her friend and fellow U.S. Federal Marshall, Edward, is along for the ride. The problem is they both know who is killing the Weretigers, they just aren’t allowed to tell others without permission. Doing so will lead the Harlequin to hunt down those that used their name and kill them. The Harlequin is working for the Queen of Darkness, who wants to kidnap Anita and take over her body.

Along the way, Anita tries to avoid multiple attempts of kidnapping, being the crush of a serial killer named Olaf, attaching a Weretiger named Ethan to her metaphysically, and getting her friends and loved ones killed.  It doesn’t help that being away from home and all of the loves of her life is making her miserable and long for their touch. Things start to look up when Anita learns she is able to deputize anyone, which allows some of her men to join her in the fight against evil.

I am very grateful to Hamilton for bringing back the old Anita, the Anita who is a federal marshal and hunts the bad gays. After reading 20 books, I am a fan of the series, but have been getting very tired of reading about sex and vampire (or wereanimal) politics. Anita is one of the strongest female characters in a series and bringing in all the men and sex was taking away from what makes her…well, Anita. She is good at her job and, for a while, I thought Hamilton had forgotten what that job was.

Now, saying that, it was also difficult to read a story that did not have Jean-Claude (sigh) or Nathanial (yum) as main characters. They are only mentioned. Instead we get more of Edward and Olaf. I like Edward; he is a good character to pair with Anita when they are hunting. But Olaf is just annoying. It feels as though every time he comes up in the books it is the same thing over and over. Hamilton even repeats herself twice in this book about who Olaf is and why Anita is uncomfortable around him. Trust me, Hamilton, your readers know who and what he is.

I think fans of the series will enjoy this book. It is definitely not a stand alone; you have to have read the other books in the series to understand what is going on and who all the players are. It is entertaining and I will look forward to the next one.