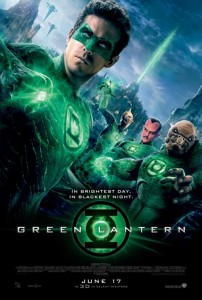 Green Lantern is quite the mess at times, but the fantasy elements of the film, along with the, mostly, stellar special effects and 3D, make for a film worth checking out if interested.

This is an origin story for the DC Comics property and all of the classic tropes will be found here.  A talented, young, and attractive Hal Jordan is a top notch fighter pilot with a couple demons to battle and lessons to be learned.  When the greatest Green Lantern, Abin Sur, is attacked by the Green Lantern Corps long thought lost enemy, Parallax, Sur rushes to Earth to let his ring select its replacement.  The ring selects Jordan and he is thrust into a battle to protect the Universe, a battle between Will and Fear, with Earth possibly being threatened by Parallax next.

The film is not without its problems, and while I enjoyed watching it, I could rip it apart in more than a couple areas.  First, the score is horrible.  The music sounds like it was a reject score from an 80’s fantasy movie with bad guitar and all.  The mixing of the score feels really hidden as well, never coming to the forefront and hiding away like it should.  Thor and X-Men’s score helped elevate their material, Lantern’s noticeably distracted me from the film; never underestimate the effect the score can have on a picture.

There is more beyond the score; the editing in the film is just awkward and jumpy.  The editing choices just seem odd, i.e. the flashback in the plane, and there are more than one occasion where we feel like we missed whole scenes that we should be seeing to move the characters forward. This lends to characters’ actions and motivations feeling very rushed/forced.  Now this could be a problem in the script as well, but regardless, characters emotions and feelings change wildly from scene to scene (sometimes even in a single scene) and Hal’s arc is almost completely unearned.  The editing also does a very poor job of setting up any sort of sense of place either, except maybe on Oa, we just kind of whip all over the place with characters seemingly teleporting from one place to another.  On more than one occasion I thought, ‘how did they get here.’

The romantic plot line between Hal and Carol Ferris oddly chooses to go for this awkward, they do like each other, they don’t, back and forth that I honestly had no idea what the two leads were supposed to be feeling for one another every time they came on screen.  This limbo in their relationship makes it next to impossible for us to believe Carol’s big speech to Hal near the end that gets him to where he needs to be the hero the Earth needs.  For the amount of time we spend on the two and their relationship, this should have been an easy sell.

Motivations and knowledge in the film in general are just assumed and asks us to just believe in them on multiple occasions; which is a shame because there are some talented actors at work here.  Just don’t be surprised to feel like characters’ arcs are all on fast forward with you unable to really see how they got from A to B.  The issues would have bothered me more if it wasn’t clearly obvious where these characters were going before you got in the theater.  The most egregious lack of characterization is the completely unearned motivations of the character’s actions in the post credit coda.  Seriously, they let on nothing of the sort in that character, it is completely assuming you know where the character goes in the comics.

Let’s get to the positives. The effects in the film are mostly great with only a few instances of crappiness.  A necklace, the dogfight and a helicopter crash all look borderline terrible.  The helicopter crash is saved when Hal’s GL powers get involved but the stuff before is the worst CG in the picture.  Director Martin Campbell’s choice to use CG for just about everything is quite the mistake as well.  The CG suits look good, but why have CG planes, or CG fire in an on set environment; these are things that could, and should, have been done practically.  Oa looks great though, as do all of the alien Lanterns that we see there.  The creature design is diverse and fairly unique which is quite impressive for how many Lanterns they show.  The Lantern effects are also done quite well, I just wish the concepts behind them could have been a bit cleverer and less Earth based. (I know, he is a human, it is all he knows.  Just wish we could have seen more cool fantastical things created with the powers.) The 3D was also spot on and worth the money if you ask me, quite the accomplishment for a post converted picture.  The action beats are also a lot of fun and creative when Lantern’s are involved; I think the film could have used one more though. I do wish we got to spend more of the film in Oa though, such a cool place to explore.  The finale was also quite the spectacle and I love where they take it; even if I am not too sure that the villain would so willingly chase after Hal.  The humor in the film also worked for me most of the time, and I wish the film didn’t abandon it so readily after the first act.

The cast assembled is quite good but criminally under used/wasted at almost every turn.  None of the characterization in the film is that good as I mentioned above but Ryan Reynolds is charismatic enough to work through it as Jordan.  You can’t deny the actor’s charms and Reynolds plays Jordan with a fine balance of ass and likeability.  The physical aspects of the role are easily handled by him and even though Jordan’s arc/motivations aren’t really earned by the film, I believed Reynolds performance as he realized his potential/strength in the final battle.  Blake Lively plays Carol Ferris fine, there is just nothing for her to do here and the film asks her to play an odd romantic arc that is confounding.  She does come across very strong and capable of handling herself though and I liked her in your face attitude.  Peter Sarsgaard is able to show glimpses of crazed brilliance, but his character, Hector Hammond is so under developed and only exists to put Carol in danger and bring Parallax to Earth; it is a real waste and shame.  Mark Strong is the stand out, isn’t he always, as Sinestro, but again I wish we had more of him.  Strong is still a captivating presence and I loved almost every minute he was on screen. Geoffrey Rush and Michael Clarke Duncan do some fine voice work as alien Lantern’s Tomar-Re and Kilowog, respectively, but they aren’t around enough.  Temuera Morrison does a fine job in his brief work as Abin Sur as well, especially in the film’s opening action beat.  Angela Bassett and Tim Robbins are completely pointless here and wasted.

In the end, Green Lantern is a big budget sci-fi fantasy that fails us much as it soars.  Many of the character shortcomings are lessened because we knew where they were going anyways but the film could have been a lot better if the characters were properly fleshed out.  Those looking for an interesting mythology, great effects, and solid action will find plenty to like, even if you have to wade through some sludge to get there.  Reynolds is a charismatic lead that is easy to like and root for; I just wish he had a stronger characterization of Hal Jordan for us to get behind.

Green Lantern is a C-