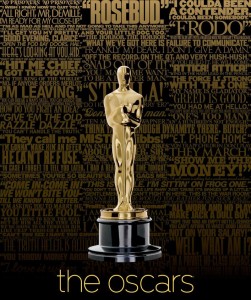 Who will win? The Hurt Locker.

Who should win? The Hurt Locker.

Everyone knows that this is a race between Avatar and The Hurt Locker. At one point at the end of the year there was a lot of talk about Up in the Air, but early promotion backlash hit it hard. So it doesn’t have much of a chance to run home with the statuette.  The ten nominations this year really opened up the category, and for that reason there are quite a few films that never would have even been considered in previous years. The Blind Side, Up, and District 9 would have never made it onto the list had it stayed at five. The fight in this category is quality filmmaking vs. Hollywood’s love for money. The love for money is very strong which gives Avatar strong chance, and it also is an entertaining film at that. However, in previous years the Academy has shown itself to be a bit of a genre snob. That image is becoming a bit more clean, but I still say they choose the gritty war drama over Dances With Smurfs.

Who will win? James Cameron

Who should win? Kathryn Bigelow

Once again, this is a category between the two heavies of this years award season. Kathryn Bigelow created one of the best war dramas of all time, and one of the most intense films I’ve ever seen. Although, Cameron put his heart and soul (and not to mention time) into Avatar, and the world around it. It isn’t that he doesn’t deserve it, but Bigelow’s vision seems to be a bit more award worthy. There are a couple dark horses in this category. The person most capable of an upset would be Quentin Tarantino who created his best film since Pulp Fiction, with his WWII spaghetti western. The academy loves awarding careers, and Tarantino is overdue. Although look at how long it took them to give Scorsese the award. Jason Reitman is now three for three on great pictures, and he has the slight possibility of an upset. However, it looks like he has a long career ahead of him. Academy members will look to reward him further down the road.

Who will win? Jeff Bridges

Who should win? Colin Firth

Jeff Bridges will take home a well deserved Oscar, but Firth should be rewarded for going a bit out of his comfort zone. Firth has always been a solid actor, but he has been defined by a certain type of role. No more Mr. Darcy for him in A Single Man, this daring performance will hopefully open up new doors for the British actor. George Clooney was solid in Up in the Air, but he didn’t really have to break type much to play a suave middle aged man. Why the Academy nominated Freeman is beyond me. His nomination would have been much more deserved to go to Sam Rockwell for Moon. Jeremy Renner is a bit too much of a newcomer, but wholly deserves his nomination.

Who will win? Meryl Streep

Who should win? Carey Mulligan

Academy members love Meryl, and she knows that they do.  I’m just glad to see her nominated for Julie & Julia over the over-rated It’s Complicated. Carey Mulligan had one of the most refreshing performances from a newcomer. Gabourey Sidibe showed a lot of acting talent, but Precious’ award is tied up in a win for Mo’nique.  Unfortunately, The Last Station just hasn’t been promoted enough for a win, and I’m a bit surprised it got nominated. Sandra Bullock is the feel good nomination, and she might have a shot an upset. Her performance while good, was shockingly commercial for the Academy’s taste. Some have suggested that she is being rewarded for her career? Please enlighten me what she does that is award worthy? Her filmography is filled with formulaic romantic comedy that managed OK box office business.

Who will win? Christoph Waltz

Who should win? Christoph Waltz

The biggest upset of the night will happen if Christoph Waltz loses out on the best supporting actor award. Just about any critic worth his weight is choosing Waltz, and after a string of victories in other large award ceremonies, it seems like Waltz is a lock. There doesn’t seem much competition. Matt Damon in nominated for the boring Eastwood film, Invictus, when he should instead be nominated in Best Actor for The Informant!. Christopher Plummer could be rewarded for a long overdue nomination, and win. The Academy loves to give people their due, even if their performance is not the finest of the year. Woody Harrelson is enjoying a banner year, but in not likely to win the award. If there was one sure fire bet to place tonight, I would say it is on Waltz.

Who will win? Mo’nique

Who should win? Anna Kendrick

This might be the weakest category of the night. I don’t know if it is due to lack of strong female supporting roles or if much more deserving roles were left out. Mo’nique is the frontrunner, mainly due to her doing so well in a dramatic role. Anna Kendrick looks to be one of the most promising newcomers in Hollywood right now, and really showed there was much more too her than Twilight. Although, her Up in the Air co-star Vera Farmiga, doesn’t stand much of a chance next to Kendrick. Maggie Gyllenhaal is a solid choice, but her performance was subtle enough to be ignored. It is a shame that Penelope Cruz was nominated over the far superior Marion Cotillard.

The rest of my predictions will be in bold: