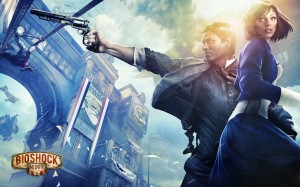 Bioshock Infinite. A game that has been long anticipated since that first video back in 2010, while enduring multiple delays, actually did become a reality. But the immediate question had been was it worth the wait? A decent amount of people feel they have that answer to the question already, but there is sure to be a good amount of people on the fence about trying it out. To those people, read on and I imagine you will get the push to play this game.

For starters, some may ask “Do I need to have played the first Bioshock (2007) or Bioshock 2 (2010) to essentially follow the story in Bioshock: Infinite?” The short answer to that question would be no. It is very open to newcomers of the series, even though I might encourage folks to at least play the first one for a greater appreciation of some elements of Infinite. Bioshock: Infinite is a new story that has a backdrop set in a fictionalized year of 1912 in a city in the sky known as Columbia. You take control of the character Booker DeWitt, who has accumulated a debt, and is instructed to rescue the girl Elizabeth as a means to clear said debt. Sure, it may seem straight-forward, but given the characterization of these two and others that you encounter you will come away thinking of it as a unique experience. Something that should be noted is that the game has ZERO cutscenes. Everything that plays out is through the eyes of Booker, as to keep you more immersed in essence. If you want more details of the story and character perspective, I deeply suggest you seek out the voxophones in the game. These voxophones that I speak of are recordings made by various characters as to make more sense of their motivations and their ties to the main narrative. I must admit, though Bioshock: Infinite is unique in its own right, I feel it has a couple of commonalities with a little game called Half-Life 2. One of those commonalities, is the aforementioned perspective through the character’s eyes and no cutscenes. The other, is the supporting character, Elizabeth. She, like Alyx Vance, are both very likeable and organic in their characterization. They’re not the typical oversexualized, low depth female character archetypes many will come across in the medium. Aside from these tidbits on the story, lets talk about Columbia for a minute.

The original Bioshock took place in the underwater city of Rapture. Upon entering it, it had long fallen into a dystopia on a grand scale. Most of the environment was of a dark and drab color palette that matched the mood of all that had transpired there before your entrance. Infinite, however, is quite literally a city in the sky with a full blown civilization that you witness with your own eyes. The colors are quite vibrant, the architecture matches the standard of the time, and there is room to explore. By definition, Infinite nails the whole aspect of atmosphere. Everything (on intitial outlook) seems so happy, and innovative.  You can’t help but be in awe of everything around you, and it almost seems to transcend the idea of just a simple “level” in a videogame. It’s a living, breathing world that commands your attention. So, if you’re a gamer with ADD, feel free to run around and find what you can in the city before coming to the point of no return with the main narrative. The items you may find in your exploration can’t hurt as far as being prepared for battles later on in the game. Speaking of battles, how does this game play?

At it’s very core, Bioshock: Infinite plays like a first-person shooter. What makes Infinite distinctive from other shooters are the various vigors that you encounter throughout the game which work in tandem with the gunplay. Vigors are basically powers that you can utilize in combat to level the playing field against the increasing number of violent antagonists. To give an example, these vigors allow you to do things such as electrocute people, throw fireballs, possess them, or telekinetically raise them in the air as to pick them off, or literally summon a murder of crows to swarm around and pick the flesh off of enemies. You read that last one correctly, and I found myself utilizing that vigor quite often for crowd control. To use these vigors, you have to obtain salts (think mana), which are displayed as a bar in the bottom left corner of the screen. Some vigors drain the bar more quickly than others as you might imagine, so you will acclimate to more strategic use of them in your later encounters. Something to note is that while using the vigor, at the exact same time you can be pulling the trigger on whatever gun you have in your other hand as to dish out significant damage. Note that I played this on the Playstation 3. So, L1 and R1 uses  vigors and guns, while L2 and R2 cycles through the vigors and guns respectively with pressing in R3 to zoom. The controls all make sense, and don’t take very long to adjust to. I imagine that people playing this on PC have the distinct advantage of a keyboard in that you could instantly map the various vigors to hotkeys and not have to cycle through them, and of course the obvious advantage of using a mouse for aiming. With mentioning the PC version of the game, one would instantly think of the graphics, would they not?

As previously mentioned, I’m reviewing this from the perspective of playing on the ps3. Most keeping count would point out that the 360 is going on 8 years old, and the ps3 going on 7 years old. All things considered, Bioshock: Infinite looks quite good on the ps3. It seems that the developers pushed it well without suffering through staggering framerates. From what I’ve seen on the PC, the graphics are surely of the caliber to write home about. The added draw distance, antialiasing, geometric detail, and a plethora of other options exclusive to the PC can easily be utilized as reason to call it the definitive version of Bioshock: Infinite.

Now to address one aspect of the game that disappointed me a bit. This is regarding Elizabeth from a gameplay standpoint. From previews, you can see that Elizabeth can open “tears” into different dimensions (I feel like she missed her calling in the X-Men) and you can see how that ties into the gameplay. Now, don’t get me wrong, she actually is QUITE useful. She’s constantly searching for ammo, salts, and health to toss you while in combat as to alleviate a sense of desperation. My gripe comes from the fact that the 2010 and 2011 footage showcased Elizabeth doing things like opening up a tear with a storm cloud, Booker shooting it with lightning, and then it spreads out across enemies below. Or, an instance where Elizabeth opens up a tear, and a train comes through and makes short work of enemies in the vicinity. I get that not everything in a preview video is going to make the final cut of a game, but I was really hoping to see some of these very things in my playthrough. But, as I said, Elizabeth is by no means a dumb AI, and can stay out of your way, and the way of danger. It’s just that I was expecting a bit more. But hey, no game is perfect.

Another thing that makes the game stand out among the crowd are the themes/topics that it confronts. Immediately, one will find that the game addresses racism, religion, xenophobia, and a grandiose sense of nationalism. I don’t see most gamers getting offended by the content in the game, but, for some, it could possibly make them uncomfortable. In my eyes, the way the game goes about these topics is not so much a shove-it-down-your throat view, but makes a poignant observation on extremism of any kind and how dangerous that can be in one’s motivations. It has long been stated that the videogame medium is one of artistic value. By definition, doesn’t art elicit  genuine emotional response(s)? Does it stay with you? Get you talking with others as to interpret everything presented to you? Yeah? Well, Bioshock: Infinite manages to do just that for you.

In closing, this game is very much worth the wait. I’d recommend this game time and time again. I might even be annoying (oh well) in how much I suggest this game.

I give this a rating of…. buy this game now, dammit.