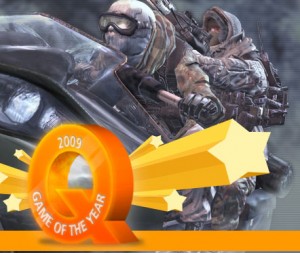 GameFly members turned out in force to award 2009 Game of the Year honors to Activision and Infinity Ward for Modern Warfare 2. The first Modern Warfare set a new gold standard for shooters and online play in 2007. Modern Warfare 2 polishes that standard until it shines, soldier! The game attacked our feeble resistance on three fronts: an action-packed and dramatic single-player campaign; a fun, all-new co-op Spec Ops mode; and better-than-ever online multiplayer with plenty of new tricks up its camouflaged sleeves.

Call of Duty Modern Warfare 2 was the big winner this year, earning the top award for best videogame overall – as well as best videogame on XBOX 360. And it deserved it! I haven’t talked to a person yet who didn’t like it. Check out all of the other winners below.

For a FREE 10 day trial to GameFly, click here!

Here is what GameFly users chose:

Modern Warfare 2’s multiplayer action was the best yet in the series. It’s no surprise that it has dominated all other titles in popularity on Xbox LIVE since it released in November.

Old-school platforming met crazy new co-op mechanics in a Mario Bros. game that was as classic as it was fresh. NSMBW won it’s category in the biggest landslide of the entire awards.

The first GTA on the DS squeezed a full-sized Liberty City experience into a pint-sized package. GTA:CW put hits out on some stiff DS competition in the closest race of the awards.

LBP brought the core gameplay of the PS3 original to the PSP with few concessions. Sackboy sewed up the win with his signature style and off-the-wall, imaginative level design.