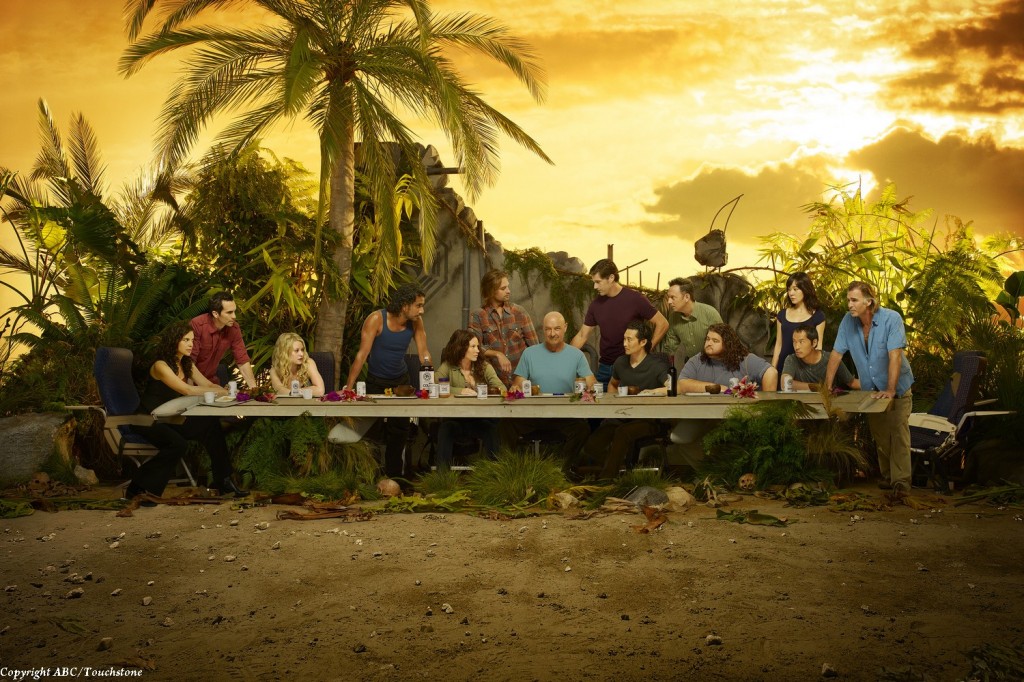 The Substitute, the fourth episode of the final season of LOST has firmly righted the ship after an average episode three and not only answered one of the biggest questions in the LOST lore but added so much intrigue to the numbers that you can’t help but get excited.

The flash sideways followed John Locke once he got off the plane and we find that he is engaged to his estranged and dead in 2007 true love, Helen, and gets fired from the box company he works for wasting company money; his trip to Australia was supposed to be for a conference but Locke skipped it to try and go on walkabout.  From here we get to a series of sideways encounters.  Hurley, who owns the box company, runs into Locke in the parking lot as John wheels out after being fired.  Hurley sympathizes over his douche boss and hooks him up with his temp agency he owns.  Rose happens to be the lead supervisor at the temp agency and she gives Locke two scoops of truth about his disability by using her own cancer as a cautionary tale.  After a sweet moment with Helen where Locke bares all, finally coming to grips that he is never going to walk again which Helen fully embraces him for; Locke finds himself subbing at a local middle school and runs into Ben who is a European History teacher at the school.

This sideways story and I know it’s early, is the best so far and has set a high bar for future installments.  Seeing Locke come to terms with his condition, happily living with Helen, well it was just really great to see.  Throw in some off island run-ins that felt right and unforced, some great as always work from Terry O’Quinn, and a nice arc of a story that worked from start to finish.  Some bullets:

-Can’t praise O’Quinn enough here, just fantastic seeing the old Locke that is a little short and quick to anger, while a bit more controlled this time, and O’Quinn plays it like he was doing it just yesterday.

-Michael Emerson is hilarious in his brief appearance at the school and I love that they are setting these two up to become off island friends.

-Ripping up Jack’s card makes me think they might have already burnt that bridge for good, but we will see, I think I would rather see Ben and Locke more that those two anyways.

-Love the positive vibe the bursts out of sideways Hurley, it calms the viewer and Locke down with ease her

-Rose showing up was the biggest stretch but I think it worked as they were two characters connected the most by the island, in that it healed them both, I will give any issue a pass as her two scoops of smack down on Locke’s, “you can’t tell me what I can’t do,” was essential to the story and her motives were valid and honest to the character

-Did I mention sideways Ben was awesome, bitching about the coffee, the same not so trustworthy demeanor, can’t wait to see where this Ben and Locke relationship goes.

Now, to the Island

Like last week’s sideways story, this was pretty much a two person show, Man in Black/FLocke and Sawyer being those persons, and the two work wonders.  The non FLocke/Sawyer stuff was regulated to a couple of scenes at Jacob’s foot and involved Ilana coming to grips with her killed compatriots, Ben sizing her up, and the burying of Locke’s body at the beach cemetery.  Now two things of note came out of this, one, the walk from the castaway’s beach to the foot seems a bit short in this episode and two, Ben’s sincere sounding Eulogy where he not only admits to murdering the man to Ilana, Sun, and Lapidus, but seemed to honestly admit that Locke was a better man than he would ever be.

Now, FLocke was a man on a mission this episode.  After running around the island in Smokey’s POV, awesome by the way, we find Sawyer in his Dharmaville house and Richard Alpert tied up and hanging from a tree.  Flocke let’s Richard out and makes one last attempt to recruit him to his side, which Richard quickly and defiantly refuses, and a small child that FLocke can only see appears rather angrily over Richards shoulder.  Disappointed in Richard’s decision, especially after his apologies and pitch that he will give him the answers Jacob never did, Locke leaves a revealed clueless, to the end game mysteries of the island, Richard Alpert and heads off to “recruit” Sawyer.  After some sweet talking in Sawyer’s house with the promise of answers to why he has been brought here and boy do we get them.  After a minor detour where the mysterious young boy shows up again, this time visible to both Sawyer and FLocke in which Richard Alpert tries and sway Sawyer to come back to the Temple, telling him that FLocke plans to kill him and everyone on the island, to which Sawyer quickly refuses.  Alpert tried to sway Sawyer while FLocke was busy chasing the boy into the jungle who seemed to be reminding FLocke that he “can’t kill him,” him being Sawyer.  Now Sawyer is aware that his man isn’t Locke, as this man, “isn’t scared,” and he is intrigued at the answers he has to give.  And so are we, as we have longed wanted to know why these people were brought here and while we don’t quite get the full answer, we take a huge step in the right direction.  FLocke leads Sawyer to a seaside cave which has a bunch of names, each assigned a number!, scrawled across the cave ceiling.  FLocke tells us that Jacob is behind all these names and all of them are scratched out except a select few; 4. Locke, 8. Reyes, 15. Ford (Sawyer), 16. Jarrah, 23. Shepard, 42. Kwon.  Oh man! From here, FLocke suggests Sawyer and him just leave the island in which Sawyer is all for.  BULLETS!!!!!!!!!!!!!!!!!!!!!!!!!!!!!!!!!!!!

-O’Quinn is some how better here then he is in the sideways story and he is making the Man in Black more and more likable with every scene.  He is also making Jacob seem more and more like the bad guy though I’m not sure what yet to believe as Ben has twisted our opinions for years now.

-Now about those names on the ceiling.  Where is Kate Austen, she was touched too right?  Which Kwon, Sun or Jin?, which Shepard, Jack or Christian? Are there any names on there we haven’t got to see yet scratched out the reference other people on the island, i.e. Alpert, Linus, more.

-I loved that the island can catch even Man in Black off guard, as it did with the young boy running around.

-Alpert‘s defiance and fear towards Man in Black has to be discussed further.  How did Jacob convince everyone that MIB is the bad guy? Or what did he do?

-Glad the candidate mystery is finally solved and this revelation sheds some light on a couple of conversations over the last few episodes, i.e. Mac expressing how they didn’t know if Jin was for sure “one of them” last week

-also, a few scratched out names I was able to make out, Mattingly, O’ Toole, Domingo, Faulk?

Anyways, The Substitute is, like LA X, already a landmark and upper echelon episode for LOST and will be one of the high points for the show.  Revealing clues and solving mysteries all at once and further broadening and enriching the mythology of the show.  The show runners seem to be really on top of their game and it looks like we will have most of the island storylines run together here in the next week or so to save us from dedicating whole episodes without seeing half the cast.  Way, anyone that moaned about last week has nothing to complain about this time and the revelations of this episode have to have you salivating for more; I know I am.

P.S. That picture is loaded with info now that we are we are 4 episodes in.