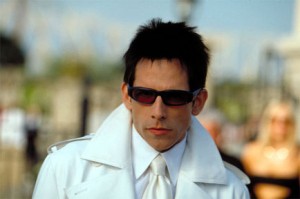 Last week we reported that there was a sequel to the cult comedy, Zoolander, in the works. (Read our article here.) Well, the star of the first film, Ben Stiller, who played the title character, Derek Zoolander, has confirmed that they are indeed working on a sequel. Stiller in an interview with MTV, said, “We are in the process of getting a script written. It’s in the early stages, but it’s gonna happen.”

“We have a new story idea that we feel excited about and we’re going to try to go forward. The beginning of the movie is [set]… 10 years later, and Derek & Hansel are literally forgotten. Nobody even knows who they are, so they have to re-invent themselves.”

He also talked about the possibility of Will Ferrell coming back as the evil fashion designer, Mugatu. “If Will says yes, he definitely has to be a part of it. To me, Mugatu is one of the classic screen villains of all time.”

This sequel really can’t come quick enough. I know a lot of people probably think I’m a film snob, but I enjoy the “stupid” comedy every now and then, it just has to be done well like in Zoolander‘s case.