Barabara Walters Rips on BRUNO and calls Pornographic – Does Anyone Care? 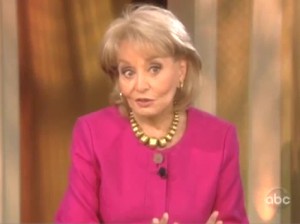 On Wednesday, Barbara Walters called Sacha Baron Cohen’s new movie BRUNO “…almost as pornographic as any pornographic thing that I’ve seen,” and said “I think this will make people, if you’re not homophobic, it could make you.”

Obviously Babs was not the target audience for this film. Maybe she thought that she was going to see “Gone with the Wind” or something…

Check out the video below:

Barbara Walters then goes on to talk about how 12-year-olds were in the theater when she saw the movie, and warns parents, “…do not bring your child to this movie!” I have to say that if you brought your 12-year-old to see an R rated movie about a gay Austrian fashionista that is made by the same filmmakers as BORAT, you might have more problems on your hands than you think.

The movie, while not for the faint of heart, is quite funny – it just might not be your grandmother’s cup of tea.

Check out the review of BRUNO.