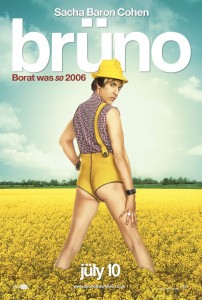 Sacha Baron Cohen is back at it with his follow up to 2006’s Borat which chronicles his homosexual Austrian fashion expert character, Brüno, is an often hilarious series of bits and skits that doesn’t overstay its welcome and is not nearly as groundbreaking do to the actor’s previous work.

Brüno is the biggest fashion expert in any German speaking country, besides Germany, and is a very open and flamboyant man about his lifestyle, sex life, and personal views. The loud mouthed bad boy of the fashion circuit, Brüno’s credentials are destroyed when a gaff at a major fashion event gets him blackballed from the European fashion world. With no where left to go, Brüno, heads off to LA to become a star as we follow his trials and tribulations to gain notoriety in the city of the stars.
Irreverent, loud, controversial, and absurd are a few adjectives that pop into my head when thinking about the film, but probably don’t even begin to do the film justice with just how far the film is willing to go. Now, I will say here, I was never offended and you shouldn’t be either if you have an open mind and are willing to sit back and enjoy the fun and silliness of the proceedings. And at its core, that is all this film is, Sacha Baron Cohen acting silly while exposing people for their true intentions and feelings on being around a rather upfront homosexual.

If you aren’t aware of Cohen’s shtick, he acts in character and dupes real people, well most of the time, into thinking he is in fact a real person. With that hilarity usually ensues over the awkwardness and caught off guard nature of Cohen’s antics produce.

Now does Cohen pray on the dim, ignorant, and idiots of our society, sure, but he doesn’t try to drum these people up as a representation of our society as a whole. When you rowel up a crowd of drunken red-necked Arkansasians and pull an elaborate homoerotic gay joke on them live and in person, you can kind of guess where it is going to go. But if you’re ignorant enough to assume that this is how everyone in Arkansas or the south acts, then the joke is on you too. Sure he is able to pull the wool over some intelligent peoples eyes but for one to complain that he is praying on the weak is a poor argument, because regardless of whom he getting after, it is usually quite funny.

The thing about Brüno, the film, this time out is that it felt a bit more staged then Borat. The finale with Pamela Anderson in his previous effort seemed obviously staged and was actually not that funny since it appeared that way. This time though, the Brüno character is so funny on his own accord Cohen is able to get us to still laugh, even when we doubt the legitimacy of the act on the screen. The film actually goes way over the top at times as well and is clearly not trying to be “real” by any means; and these over the top antics usually involve a penis to boot.

Fair warning though, anyone that is squeamish to any of the topic discussed so far, just be warned there is plenty to see here that will not settle with you very well. Many shots of the male genitalia are sprinkled throughout and possibly the funniest scene of the film has Cohen’s penis, well at least he said it was his, splashed across the entirety of the screen going out of control. Now there are no bodily fluids at play if that is what might scare you off, but there are many erotic situations staged, simulated? sodomy and felatio, trips to a swingers party, and more; they do not hold back. And it’s all played to jokes, quite effectively actually, and if you can have a light heart about it, I’m sure you will get a laugh or two out of it as well.

Lastly, Sacha Baron Cohen again shines in his ability to create such a well versed and hilarious character that he is some how able to stay in as chaos and nonsense unfolds around him. It really is remarkable, his abilities to be so witty and quick in character and never break form outside a sly smile he quickly hides and quells. His performance is worth the price of admission, as it was in Borat, though I am glad that this is probably the end of these types of films for him and look forward to getting to see more of him in straight forward motion pictures; and he will also avoid the risk of the shtick becoming stale, because it is already not as fresh as it was three years ago.

In the end, Brüno has plenty of laughs for those that aren’t put off by the material but isn’t start to finish hilarious at only 80 some odd minutes. You will find plenty of fun and enjoyment out of the picture when you are watching the first time but I am interested to see how it plays out on repeat viewings as I’m not quite sure how it will hold up. If you are a fan of Borat, and you aren’t a homophobe, then you should find plenty to enjoy again here as it is more of the same, but that is a bit of a problem in that it is more of the same and not really groundbreaking in any way other than Cohen taking things even further than he did the first time around. With all that said though, it made me laugh quite a lot and quite hard and if you are interested by the trailer then you should by all means see it as it lives up to what it’s selling, but nothing greater beyond that.

Brüno is a B