The Bachelor Season Finale 2010, The Winner Is… 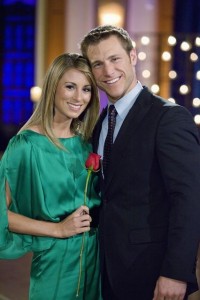 After an entire season of anxiously awaiting the rose ceremony, the winner of “The Bachelor: On the Wings of Love” this season has finally been chosen.

Jake Pavelka, the airline pilot that has flown into the hearts of many women who watch the show, decided that Vienna Girardi was the girl of his dreams. He said, “I’d never ask a woman for her hand in marriage unless I was 100 percent sure.”

Vienna was one of the women that the other ladies in the competition showed animosity against during the entire season. But none of that matters now, and Vienna is the one who will get the last laugh. Jake said, “When I’m around Vienna, she makes me feel like I’m the only guy in the room.” He added, “Vienna’s my baby. I got everything I thought I needed, and a million other things.”

After Jake chose Vienna, Jeffy Osborne actually came out an sang “On the Wings of Love,” as the two danced together.

Here is a photo gallery of Vienna Girardi, from pictures on MySpace and Facebook:

We want to know what you thought of Jake’s pick! Should he have chosen Vienna, or was there someone else he should have picked?  Leave a comment below!