“Avatar: The Last Airbender” Sequel “The Legend of Korra” To Air on Nickelodeon in 2011

Avatar: The Last Airbender might have experienced some disappointment last month when the long anticipated live action adaptation hit screens to awful critical response. Now they have something to be happy about. It has been rumored since May, but the long awaited sequel to the Avatar: The Last Airbender series, The Legend of Korra will be premiering on Nickelodeon in 2011.

The Legend of Korra will focus on the Avatar after Aang, a Southern Water Tribe girl named Korra. Having already mastered three elements, she goes looking for her final master to teach her airbending. Her airbending master will be none other than Aang’s son Tenzin. Korra must travel to the Republic City, a steampunk inspired metropolis where anti-bending sentiment is rising, and crime is plentiful.

Korra is described as a hot-headed, independent, energetic Avatar who is “ready to take on the world.”

“Michael [DiMartino] and Bryan [Konietzko, series creators,] have imagined a compelling new story inspired by the Airbender mythology that they so brilliantly crafted when the TV series began,” said Nickelodeon Network President Brown Johnson. “This new avatar is not only a girl, but also hot-headed, independent and ready to take on the world.”

Having just recently completed all three seasons (or books) of the Avatar: The Last Airebender series, I am absolutely stoked. Once the series was finished I was left wanting more, and I’m glad that the series creators have decided to write more stories concerning the Avatar. I’m going to miss the regular characters, but this new take looks great. 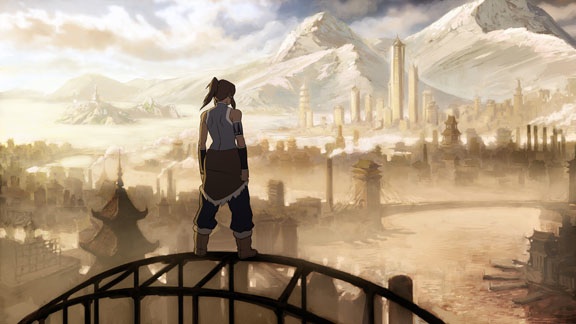