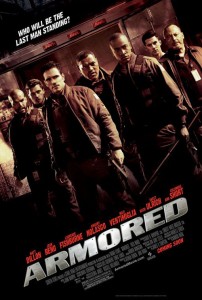 Ty (Columbus Short), a rookie armored truck security guard, reluctantly accepts an offer from his fellow guards to rob their trucks of $42 million. Everything goes 100% according to plan and everyone lives happily ever after. Ok, maybe the last part was wrong. I believe nothing went right and a whole slew of problems ensued. Sounds familiar, right?

Basically Ty is a person that Murphy’s Law was written about. His life appears to be a tragic version of “Meet the Parents” where nothing is going right for him. Between two mortgages, hospital bills piling up, and Child Protective Services threatening to take his brother away, I think it is safe to say this young man could use a break. Just when Ty needs it the most opportunity comes walking through the door in the form of Mike (Matt Dillon) and he has the solution to all Ty’s problems. Unfortunately for everyone else Ty, a decorated war hero, is the walking example of integrity and moral fortitude regardless of the numerous hurdles in his life. When push comes to shove though, he very hesitantly accepts the heist and from here you can figure out what doesn’t go right (hint: it rhymes with smeverything).

The movie attempts to do two things in 88 minutes. A) Show the nature of man and the various paths they choose when confronted with greed and B) See how many things can get blown up and go wrong. I get the feeling director Nimród Antal really wanted to explore option A here but he tries to do it in such little time that the effect is essentially flat. We have very good actors here that are just given too little to work with. Matt Dillon plays the man consumed by greed well enough. My only problem is I get the feeling he just showed up for the paycheck. He pretty much just plays Matt Dillon here. Baines (Laurence Fishburne) was a notable addition with his goofy horseplay yet ruthless nature. It was a little bit of a different role than we are used to seeing from him which I appreciated. Columbus Short does the best he can do with what he is given. He has such a cliché character but I do believe he did a very good job considering that. I really thought Palmer (Amaury Nolasco) and Dobbs (Skeet Ulrich) had the stand-out performances but that leads me to my gripe about all these characters.

They simply are not given enough screen time to breathe and so they feel cliché and two-dimensional. An extra 20 minutes really could have done these performances more justice and made this not feel like a short and forced “Reservoir Dogs” rip-off. Hopefully there is a director’s cut and we get to see more of these actors in action. This has all been so negative and I don’t want it to come off that way. It was actually a very fun movie. The pace is relentless and even though it is PG-13 it finds ways to make that work and not come off as subdued in any of the standard R-rated departments. If you’ve seen a few heist movies in your time then you have already seen this but that’s not necessarily a bad thing. Sometimes generic is a good way to kill an hour and a half and this movie delivers on that. Albeit formulaic, it is fun, entertaining, and you certainly won’t be bored.

Armored is a C+

Just an extra tidbit: On a completely unrelated note, I always find it odd in these types of movies that when backed into a corner, your average Joe Schmoe all of a sudden becomes his own little MacGyver. I know nothing about explosives, hot wiring, the theory of relativity, or women. So my advice to you is if you are ever in a sticky situation call your quiet, moral friend and they will become your own little impromptu “get out of jail free” card.