I’m really on the fence about this. Entourage is one of my guilty pleasures. I can’t find a reason why I like it, but I do. The storylines are a bit contrived, and the constant stream of guest stars was great at first, but some of them have been plain awful. Not to mention the fact that I cannot stand Johnny Drama. It is one of those shows I only watch because I started watching it early in its creation. I’m still not sold on Jeremy Piven always getting awards for being Ari, because it seems like the character is much more of a caricature than it was in its first few seasons. It does have it’s moments, but I’m not sure it is something that will translate well on the silver screen. 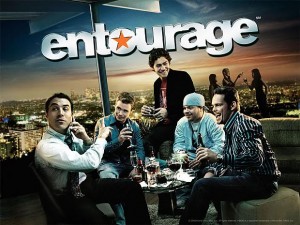 Two more seasons of HBO’s “Entourage” and then a movie?

That seems to be the plan, according to the show’s executive producer Mark Wahlberg.

Asked about the future of the comedy series, which recently was picked up for a sixth cycle coming off one of its strongest seasons, Wahlberg indicated that he believes there are two more seasons left in the show.

“We’ll see; there could be more,” he said at the premiere of his latest film, “The Lovely Bones.” “But then, a movie.”

HBO seems on board with the idea.

More awards coverage
“It is not out of the realm of possibility,” an HBO spokeswoman said about the prospect of an “Entourage” movie. “Right now, the creators are concentrating on the new season.”

In following a successful series run with a movie, the Doug Ellin-created “Entourage” would mirror another long-running HBO comedy, “Sex and the City.”

Then there is a long-rumored “The Sopranos” movie, which has not moved closer to reality.

Sex and the City worked because it has a huge fan base of women who want to see their characters journey continue. Entourage is one of those shows you watch because it is Sunday night and nothing else is on. It might do some business, but not enough to make it worth anyone’s time.