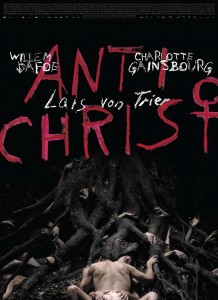 Lars Von Trier’s latest film is among the most disturbing things I have seen put to film. It is hard to describe the things that occur in the film without piquing someone’s interest. No matter how beautifully filmed and acted it is, I can’t imagine anyone wanting to watch this film. If you could sit through films like Salò and Tetsuo: The Iron Man and enjoy them, then this might be right up your alley. Although the average film patron is neither going to enjoy or understand a film like this.

The film starts in shocking contrasted black and whites. A married couple is making love while their child finds his way out of bed.  We are shown all of this horror in slow motion while operatic tunes set our stage.  The passionate love making of a couple, who have no idea their child is falling out an open window to his death. When we meet up with the couple once again (who are never named, only credited as “He” and “She”), “she” is having trouble accepting the death of her son. “He” who we are let known is an experienced therapist, is diagnosing his wife. “He” wishes to make her confront her fears head on. One of her worst fears is the forest in which they own a cabin. When they travel to the forest, “He” begins uncovering much more than he expected, and things between the couple will never be the same again.

The film is surreal from the very beginning. The black and white slow motion lovemaking is shown in full detail, and the death of the child is almost the money shot. Right away you know the film is going to be beautifully shot, but disturbing to its very core. There are so many disturbing images in this film that constantly hit you with an intensity so fierce that it will wake you up from the stupor that occurs during the rest of the film. The biggest downfall of the film is the fact that even at its most disturbing, it still manages to be dull. The film plays itself as an art house horror film, but the thrills are more due to being offensive for shock value rather than anything actually horrifying.

Certain scenes play out as if Lucifer were trying to direct Misery. Yet other parts look like something out of a fantasy movie. Von Trier has the problem of slowing down images to give them an otherworldly feel, but at the same time he seems to lose much of the forward momentum in his storytelling. It was amazing how the film, which at times had me cringing, had me wanting to take a nap in every other scene. The film feels so much longer than its running time of 109 minutes.

The acting is to a feat be admired. Charlotte Gainesbourg steals the movie with her performance as a crazed grieving mother, and later just crazed.  Willem Dafoe convincingly plays the grieving father who wants to use logic and therapeutic techniques to put his son’s death to rest. Their disfunctional relationship is one of the few things that propels the movie forward. What starts as a loving but damaged relationship between the two becomes a struggle for life quickly.

I can’t recommend anyone seeing this movie. I really can’t see what anyone would take from it. I do think it is one of the more artisically shot films I have seen in recent years, and the acting is superb. However, the slow pace and disturbing imagery (which I would describe but some of it isn’t fit for this site) really keep this from being watchable at all.

Another Take From Zac:
First and foremost, Lars von Trier’s Antichrist is an unsettling tale in its morbid character study under the circumstances of a lost child, the sexual nature of the film, and the mutilation and violence that arise in the film. But the film is extremely affective and beautifully shot with daring and brave turns by the two actors involved.
With all of this said I don’t think I could ever find another reason to watch this film again but not because I didn’t think it was good, but because it is such a messed up experience. The violence, the disturbed emotion state of She (Charlotte Gainsbourg), the beautifully shot but heartbreaking tragedy of the prologue, the mutilation, the mind f*** of the later part of the film, it is all very unsettling. If you think you can stomach this though the film is beautifully realized and intriguingly bizarre.
The film, in brief, follows He (Willem Dafoe) and She as they cope and She battles her inner demons over the loss of their son in a tragic accident. He is a therapist who is trying to help his wife She as they try different copping methods and strategies to get over their loss which eventually leads them to a family cabin in the woods of Eden. From here, things begin to get a bit out there.
Technically, as I have already touched on, is superb. The actors are magnificent and some how dive head first into this world. The gruesome bits are realistic and believable and not at all over the top which makes them even more disturbing in their realism. Trier’s visual flair is also awe inspiring even when the imagery makes you want to look away. When he crafts a film that keeps you glued to the screen even when you can barely take what is being shown on it because the cinematography is so gripping you have to stand back and appreciate what he and his team has done. The film also moves along quite well, never dulling or becoming un-engaging to the viewer as Trier’s work will transfix you and I think that above all is a testament to this film when it works.
The story itself, while I think is a great premise to borough into peoples psyche, is a little light on motivation once things really get crazy in the final act. The sexual needs and acts also see almost random at times as things go on and don’t make a whole lot of sense, especially in contrast to the need in the beginning. She’s deductions on women are also quite a stretch for her to buy into so easily for someone as intelligent as she is and that is the biggest problem for the film most of all that She would go through this transformation.
The actors deserve a lot of credit as well for completely giving themselves over to these characters, with Gainsbourg particularly going to dark places you rarely see in main stream film. The nudity, the sex, her sickness, the violence, she takes it all seemingly in stride and never wavers our belief in her character even if the story is a bit of a stretch. Dafoe also does a fine job in the second fiddle role here but its his chemistry and desire to help with She throughout the early goings that make the final act as affecting as it is as we try and get our heads around why this is all happening.
In the end, Antichrist is a beautifully shot and arresting film that could have used a little bit more story and plausibility. That’s not to say the film won’t suck you in and transfix you to the screen as awful things unravel over the course of the film. The actors go all out and they will shock you along with Trier’s twisted vision in this film that will not settle well with most. But if you aren’t scarred away by all this talk yet, you might want to give the film a shot as there is a lot to appreciate here on a number of levels, just don’t expect this film to become your new rainy day favorite by any means.