Enter to Win FREE Passes to “Michael Jackson’s This Is It” at the St. Louis Advance Screening

ReviewSTL invites you to enter to win passes to the St. Louis advance screening of “This Is It” 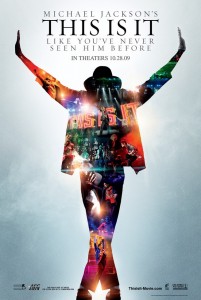 In order to enter the contest, simply leave a comment at the bottom of the page telling us what your favorite Michael Jackson song is, and why. Winners will be chosen at random and notified via e-mail. NO PURCHASE NECESSARY.

Screening is TUESDAY, OCTOBER 27TH at the Chesterfield Galaxy 14 (8:30 PM). Please note that winning passes to “Michael Jackson’s This Is It” does not guarantee admission to the film. You must arrive early as seating is first-come, first-served. It is usually safe to arrive at least 1 hour or more before show time!

Michael Jackson’s THIS IS IT will offer Jackson fans and music lovers worldwide a rare, behind-the-scenes look at the performer as he developed, created and rehearsed for his sold-out concerts that would have taken place beginning this summer in London’s O2 Arena. Chronicling the months from March through June, 2009, the film is produced with the full support of the Estate of Michael Jackson and drawn from more than one hundred hours of behind-the-scenes footage, featuring Jackson rehearsing a number of his songs for the show. Audiences will be given a privileged and private look at Jackson as he has never been seen before. In raw and candid detail, Michael Jackson’s THIS IS IT captures the singer, dancer, filmmaker, architect, creative genius, and great artist at work as he creates and perfects his final show. Kenny Ortega, who was both Michael Jackson’s creative partner and the director of the stage show, is also directing the film, which is being produced by Randy Phillips, Kenny Ortega and Paul Gongaware. Executive producers are John Branca and John McClain.