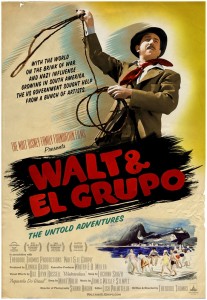 There has always been an American fascination with Walt Disney and his creations. However, few people know that Disney along with a hand picked group of animators, film makers, and businessmen were part of the U.S. State Department program, Good Neighbor policy. This documentary is the story about Disney and his group, dubbed ‘El Grupo’, and what they accomplished in their stay in South America.

The 1940s were a turbulent time in the world. Hitler was on the rise, and at the beginning the United States was not getting involved in the conflict. Much of Latin America had not declared its support one way or another. The U.S. State Department started its Good Neighbor policy, and among their plans was to send popular entertainers to win over the Latin America crowd. Among those tapped was Walt Disney who was one of the biggest names in Hollywood due to the success of his feature length animated film, Snow White and the Seven Dwarfs. Unfortunately, things weren’t going that great for Walt. He had just built a new studio, and not long after his artists went on strike. When given a deal by the U.S. Government to make a ‘goodwill’ fill in association with Latin America, that would be underwritten by the government, what did he have to lose?

The documentary shows us Walt’s trip as goodwill ambassador from the United States. It follows his stops in Brazil, Argentina, and Chile. The scenery is beautiful, and the story is interesting at first. The film’s pace steadily goes down hill after they leave the beautiful city in Brazil, Rio De janerio. The most breathtaking and vibrant scenes take place in Rio, and it is obvious from the letter read and the pictures shown, that this is where ‘El Groupo’ had the most promise and most fun.

As the film progresses each stop looks like it has its fun, but none of that fun is conveyed to the audience. We are instead introduced to long montages of slow moving shots of old pictures from the trip. The pace of the film could have been picked up quite a bit more, but it sometimes feels equivalent to a slideshow a family friend might show you from a vacation. Sure, some of the shots are pretty, but knowing no one in the pictures makes it feel empty and a bit boring.

It seems many points are presented too many times, by too many different letter or different eyewitness accounts. I like that director Theodore Thomas (son of Frank Thomas, one of the members of ‘El Gropo’), is giving us multiple sources for the whole story to give it a cohesive feel. It just drags on a bit too much, and some quality time could have been used in the editing bay.

There is also an overwhelming sense of not getting the full story of Walt. The film starts out by telling us of the political climate, and the problems Disney was having at his own studio. Before we can get any closure, it moves on to the next point. They present us with an interesting thread, and like a cat we bat at it only to have the string pulled away to taunt us again. We eventually get told the studio is no longer on strike, but after spending a bit talking about how it started, it would have been nice to see more fully how it was finished. Thomas missed a big opportunity to contrast the difference between his team in Latin America and his team on strike back home.

Walt and El Groupo is a film that starts out fascinating, and grows into something merely passable. It might be a good film to self educate with, but it doesn’t work well as entertainment. With a little more time in the editing bay, and chucking out needless pieces this could have been a great doc. Although, be prepared to want to watch Saludos Amigos, the product that came from the expedition to Latin America.