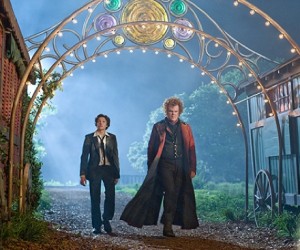 Cirque Du Freak: The Vampire’s Assistant is the latest in a string of vampire themed movies. The film is adapted from a series of popular novels by Darren Shan. Directed by Paul Weitz who just happens to be the brother of The Twilight Saga: New Moon‘s director Chris Weitz. In this current glut of blood suckers that we are experiencing, does this one hold up? At times better than others, but comes very far from putting itself with some more popular vampire and occult themed movies.

The protagonist of our story is young Darren Shan (who in the ultimate show of ego is named after series author Darren Shan), who is a somewhat normal teenage boy. He is popular, well liked, and gets straight A’s across the board. His best friend, Steve, is a bit of the opposite. Steve is the id to Darren’s ego. While Darren keeps himself in check, his best friend continues to dare him and prod him into activities that could quite likely get him in trouble. Even as different as the boys are, they are inseparable. They both have their fascinations. Darren’s is spiders and Steve’s vampires. Things start to go awry for the boys when the Cirque Du Freak comes into town. A mysterious black car with the license play, DES – TINY, rolls down the street and lets loose a flyer for the supernatural circus.

The viewers are treated to the sight of all the “freaks” of the circus and their abnormal abilities. There is a woman who can regrown limbs, a man with two stomachs who can eat anything, a snake boy, a bearded lady, a wolf man, and last but not least a vampire. The vampire is none other than Larten Crepsley who Steve knows from one of his many vampire books. Larten is the master of a giant spider, Madam Octa, who immediately Darren is mesmerized by. After the show the boys both set on their way to an encounter that suits both their fascinations. Darren steals Madam Octa, and Steve confronts Crepsley about being turned into a vampire. Darren succeeds, only to have Steve turned down by Crepsley. In anger Steve attacks Madam Octa and ends up receiving what could be a fatal bite. Darren has no choice, to save his best friend he confronts Crepsley. The vampire has one condition for receiving the antidote, Darren must become a half-vampire and become his assistant.

It takes a while for the story to get started, which is one of the film’s biggest problems. The first half of the film is just a set up so we can be introduced to the Cirque Du Freak, and the boys who are fascinated by it. The film gets a bit wrapped up in trying to get started. I would imagine if this film does well enough, the sequel would be a much better film due to the fact that it could dive right into the meat of the story. What we do see is a vibrant world filled with all kinds of fantastic looking characters, but the interest is only skin deep. Many of the characters introduced are only used to small effect.

You’d think with a cast with this amount of star power you’d see a bit more characterization. Willem Dafoe, Salma Hayek, Ken Wantanabe, Patrick Fugit, and Jane Krakowski are all used in bit parts that never truly let them shine through. Sure they all get a clever line or two, but unfortunately in this film we don’t get to take much from their characters. Although, even if they are used to minimal amounts, the performances they turn in are much better than the stars of the film.

John C. Reilly is an actor I normally admire, but in this I couldn’t take him very seriously. I can never get a good feeling on if the character is supposed to be a farce or if Reilly just can’t play a straight character anymore after all of his over the top roles in recent comedies. Reilly plays him like a gunslinger, but often comes off looking like a clown. You get the impression that Crepsley should be feared, and is one of the strongest of his kind. If he is indicative of his kind, I could see why someone would want to be a Vampaneze (the bad version of a Vampire).

Newcomer Chris Massoglia seems to be channeling a young Ashton Kutcher. The resemblance is both looks and acting is uncanny. The performance is a bit wooden, and when a measure of wit is required for the character something seems to be sorely missing. Although Massoglia seems to be a step ahead of co-star and on screen best friend Josh Hutcherson. His tendency to overact grows with the intensity of his character Steve. The manic look he tries to give throughout much of the film feels false and flat. I don’t know if it is because in real life Hutcherson is just a nice guy who just doesn’t understand how to channel a bad guy.

Cirque Du Freak seems to be invested on setting up a wild new world and a clever storyline to follow it. Unfortunately, much of what we see displayed here has been seen before and been done better. That isn’t to say it isn’t a fun time. Most people will have a good time and enjoy it. There will be times where the movie is obviously setting up a joke that ends up falling flat on its face. There were times I knew I should be hearing laughter, but was greeted by nothing but silence in the rest of the theater. Despite all this almost everyone I talked to enjoyed the film to a point I hadn’t expected. I enjoyed it enough to say that I think future sequels could be interesting, but it needs to find solid footing first.