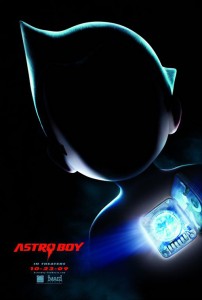 Astro Boy is the creation of the late Osamu Tezuka, revered as one of the greatest animators of all time in Japan. Known as the father of modern “manga” animation, Tezuka brought the animated series to the US during the mid 60s. It has now become a full length animated feature, touting an impressive cast of voice talents at the helm of director David Bowers (Flushed Away).

The story revolves around Toby (Freddie Highmore) – a brilliant student, and son of Institute of Science head Dr. Tenma (Nicolas Cage). Dr. Tenma pioneered robotics, which live amongst humans in their futuristic home of Metro City – which floats in the air above Earth. Robots cook, clean, drive, and do pretty much all of the jobs that humans just don’t want to do. When robots are no longer useful or get destroyed, their scrap metal parts are dropped off of the edge of the city – falling to a robot graveyard on a desolate Earth.

One day after school, Toby greets a hologram of his father while riding home, explaining that he is busy with work and will not be able to spend time with him. Dr. Tenma tells Toby to go home, and not to come to the Institute of Science to see what he is working on. This of course turns into a predictable “stay in the car” type moment where Toby disobeys and rewires his robotic chauffeur to take him straight to the institute. After arriving, Toby is discovered and eventually locked in a broom closet to keep him out of trouble. His intellect prevails, and he sneaks into the laboratory to witness the unveiling of his father’s latest creation – “The Peace Keeper.” This name is ironic and humorous, because the robot is gigantic and destructive, and wants to do anything but keep the peace.

Dr. Tenma and his partner Dr. Elefun (Bill Nighy) have been researching the use of blue matter – an incredible power source that is clean and infinitely renewable. Dr. Elefun lectures about the ability to clean up Earth and make it livable again with this great resource. But he warns that in extracting the blue matter, the dangerous and unpredictable red matter is created – the two of which should never be combined. What is predictable however, is that the president of Metro City (Donald Sutherland) and antagonist of the story wants to use the red matter to power the Peace Keeper robot. The leads to the robot becoming out of control, and the scientists have to put the laboratory on immediate lock down. After finally lowering the protective glass window that separates the lab into two, Toby makes his presence known and of course is trapped on the wrong side of the window. As the ironic Peace Keeper powers up his weaponry to destroy the window, a huge blast of light overtakes the entire room. When it is over, the only sign of Toby to be found is his red hat.

From here, the movie really gets started. Stricken with the loss of his son, Dr. Tenma works day and night to create a replacement for Toby. Given the fact that he is the father of modern robotics, and the best at what he does, Tenma sets out to create the most advanced robot ever created . He wants to make sure that he never loses his son again, so he designs a robot with advanced defense and weapons systems. With a single strand of hair from Toby’s red hat, the scientist is able to recreate his DNA and produce an identical replica of his boy. He looks like him, talks like him, is intelligent – and even has all of his memories. He awakens knowing nothing of being a robot, as Tenma wants him to go on living an ordinary life. Now there are some flaws with this – like the fact that robot Toby is so heavy (which makes sense, given he is loaded with advanced robotics and weapons systems) that he completely crushes a piece of machinery before he is awakened – yet never realizes how heavy he is when interacting with everyday objects. Not to mention it would be hard not to realize that you have robotic parts when doing everyday activities, since he had the memories of feeling like a human. But I digress, as the story would not properly without ignoring some of these details.

The rest of the movie is about Toby dealing with being different, and inevitably dealing with the fact that he is a robot. Of course Tenma’s rash decision to create a robotic replacement for his son was clouded by grief. But I would think that he would have thought of some basic problems that would eventually arise; like the fact that Toby would never age. Plus, what would happen when he does get into a situation where he has to use his defense systems? His plan to bring Toby back to life was an imperfect one, and he realizes this when he tries to interact with Pseudo-Toby. So he makes one of the hardest decisions possible – to deactivate his creation. But Toby overhears a discussion with Dr. Elefun about his plans, and jets away from his troubles. This leads him to be chased away by the President and police, only to end up on Earth with the leftover robots and a band of human misfits that still live there. Here we meet his love interest Cora (Kristen Bell), her band of “lost boys” so-to-speak, and Ham Egg (Nathan Lane) – an inventor that was banished from Metro City by Dr. Tenma himself. They take him in, and this is where Toby finally becomes “Astro Boy.”

Overall, the film is entertaining, but lacks that certain connection with the entire audience to make it something great. The animation is decent, but pails in comparison to animated features of late. It is widely accepted that movies geared towards younger audiences often lack the balance to impress kids while keeping parents entertained. Lately animated films have been doing a much better job of this. But while kids are sure to love Astro Boy, the same can’t be said for their parents. The attempt to interject humor for adults more often falls flat than not. There are three sets of characters that provide comedic relief during the movie: Tenma and Toby’s robot butler (Eugene Levy), a duo of window cleaning robots, and a rebel alliance of robots that call themselves the Robot Revolutionary Front (RRF), voiced by Matt Lucas, Bill Nighy and David Bowers himself. I found the RRF to be the most entertaining characters, but that isn’t saying much. I did however think that the voice talents in the film did a good job, with the exception of Nicolas Cage as Dr. Tenma. Cage gave no personality to his character, using a monotone voice throughout the entirety of the film.

Astro Boy is a great film for kids, which are the intended audience. There is enough action and excitement to keep the younger crowd entertained from beginning to end. It is a fun movie, and entertaining enough to sit through – just don’t expect parents to be too impressed. 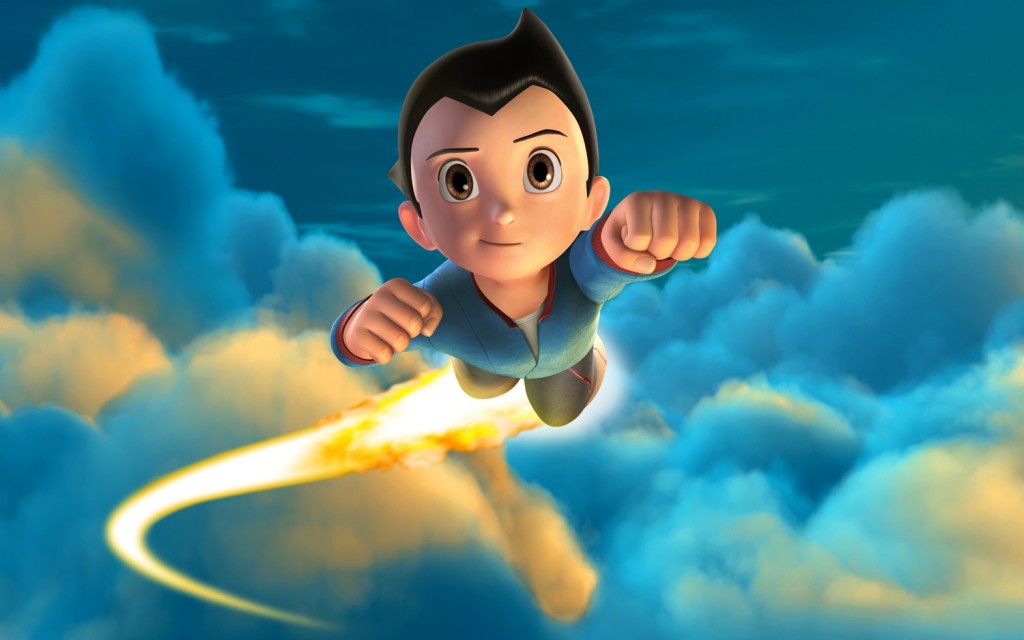