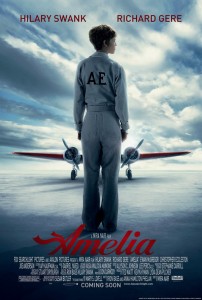 Mira Nair’s latest is a dull, bland, and almost completely forgettable effort that while capturing the look, sound, and stories of Amelia Earhart it fails to create any drama, tension, or just about any emotion inside of us over it’s run time.

Spoilers ahead if you some how have know grasp on history.

Picking up at the launch of Earhart’s tragic flight around the world we will float back and forth through her life from the moment she met her future husband George Putnam and multiple stages along her fateful flight. Right here from the get go the film is in trouble. The relationships that begin to form in Amelia’s life are quickly glossed over and the film jumps forward through time at a fairly strong pace. Earhart’s relationship with Putnam manifests almost out of thin air and next thing we know they are married. Ditto for an affair that arises in the film and implies infinitely more than it shows. All this would be fine if we at all believed in their relationship, one that a certain Earhart biographer deemed the love her life, but instead comes across as really nothing very passionate at all. In fact the film fails to rouse any passion at all, be it in its heroine’s relationships, her supposedly death defying flights, or her impact on the culture of America and the fame that she garnered.

The films dialogue is also awful, ranging from hokey to pretentious, its eye rolling bad at times. And it feels like they try to make everything freaking word out of Earhart’s mouth to be profound, insightful, and important, but is never nearly as ingenious and marvelous as they intended. The films flow and pacing is also a train wreck with the film crutching on news reel montages to moves us forward and leaving many scenes feeling truncated and zero transitional abilities from one scene to the next; you will be sick and tired of the “cut to white clouds” transition they use way to much. There are a few pretty shots from the air in the around the world flight portions of the film, but other than that there isn’t a lot to praise about this film technically.

The actors are OK; Hilary Swank nails the look, feel, and sound of Earhart but is unfortunately given zero good material to really work with. Putnam is even dryer and more boring the Earhart and Richard Gere isn’t able to elevate the role at all and is instead forced to deliver all the worst “movie lines” of the film. The only real bright spots are Christopher Eccleston as Earhart’s around the world navigator and Ewan McGregor as Gene Vidal. Sadly, any spark they can bring to the picture is limited to very few scenes and moments of screen time and they are barely able to spare any bits in the film.

Above all I think I was most disappointed at the complete inability to make any of the flight scenes some what tense or at all thrilling. The attempts at suspense feel contrived and one flashback sequence during a thunderstorm on the way to Europe flying solo is just completely pointless, out of place, and bizarre. I will say that the final scene of the film as Amelia struggles to maintain radio contact and find her island did pull me in and finally engage me in some capacity, but by the time I was out of the theater I found myself groaning at the awful mess of a film I just saw.

Amelia seemed like a very good opportunity for a biopic but is sadly a dud on almost all levels. Swank successfully fills the role of Earhart in spades but the film does very little to make her compelling or interesting and the story is just as non-engaging. I can’t really recommend this film to anyone, not even fans of the aviator as I am sure the many books written on her are far more interesting and entertaining because that is the last thing this film will ever be described as.

Amelia is an F+ (the plus is for Swank)

Another take by Kevin:

Amelia is the story of Amelia Earhart, one of the most famous women in history (and of course aviation). She was the first woman to fly across the Atlantic solo; second only to Charles Lindbergh.

In the film, Earhart is played by Hillary Swank, who looks impressively like the famous pilot. The similarities between the two, both in looks and mannerisms, is quite good. Swank’s portrayal of Earhart isn’t her best performance, but it is done quite well. We are shown how Earhart is introduced to her Publisher / Public Relations expert George P. Putnam (Richard Gere), who also becomes her husband. The two of them set out to conquer the world together; both in the same way, but for different reasons. From the time Amelia was a little girl, she wanted nothing more than to fly. In the scene where her and Putnam meet, he asks Amelia why she flies. Her response is “why does a man ride a horse?” He replies that he supposes it is because “he wants to.” And so Amelia sets forth to do the things that she wants to do, which all revolve around flying. And Putnam sees how he can financially benefit, and of course he is game.

Over time, Earhart and Putnam’s relationship grows into something much more than business, although Earhart is hesitant on account of the fear that marriage will turn her into a housewife. But Putnam promises that it will never happen, and they move forward with their plans as a married couple. The dynamic between the two lacks something exceptional. The chemistry does not seem very natural, although what does show is the reluctance of Amelia to be held back by anybody. Later in the film, Amelia meets flying instructor Gene Vidal (Ewan McGregor), and the chemistry between the two of them is much more natural – yet short lived.

The main problem with the film is that it tried too much to become something epic, and it was consumed by it’s hunger to appear much larger than it actually was. The accomplishment’s of Amelia Earhart were truly exceptional, and the film did an excellent portraying her as an inspiration to women around the world. But the film lacks enough excitement to keep audiences entertained throughout, and the first half of the movie moves very slowly. The dialogue written for Earhart did not seem natural coming out her mouth, but at no fault of Swank. The movie made it seem like she was a philosopher with the great lines of wisdom that she spoke at every other turn. It just seemed out of character that she was basically some kind of sage to herself, and the support of any of the other characters didn’t even seem necessary. One of the most important parts of her story that the film missed was her life growing up, and her struggle to be a female aviator. Aside from her first flight across the Atlantic as a commander rather than pilot, she faced almost no adversity. The audience is given no information as to how she was chosen for the flight, or what she had to do to get there. One minute she is walking into Putnam’s office and told there are many candidates being considered, and the next scene she is getting ready to make the flight. They could have cut a lot of lengthy scenes out of the latter part of the movie, and told a little more back story.

In the end, the film was shot well and the actors did a decent job portraying the historical characters that they set out to become. The downside is that the story became boring rather than interesting and exciting, and the pacing was excruciatingly slow. For aviation buffs and people that remember her historic flights, the movie will most likely be captivating due to the subject matter. But for the younger audience and those that know little or nothing about the characters, the movie will just seem long. This is a movie that should absolutely be purchased by the History Channel or A&E and be played quite often, as it is better suited for the living room than the silver screen.

Amelia is a D 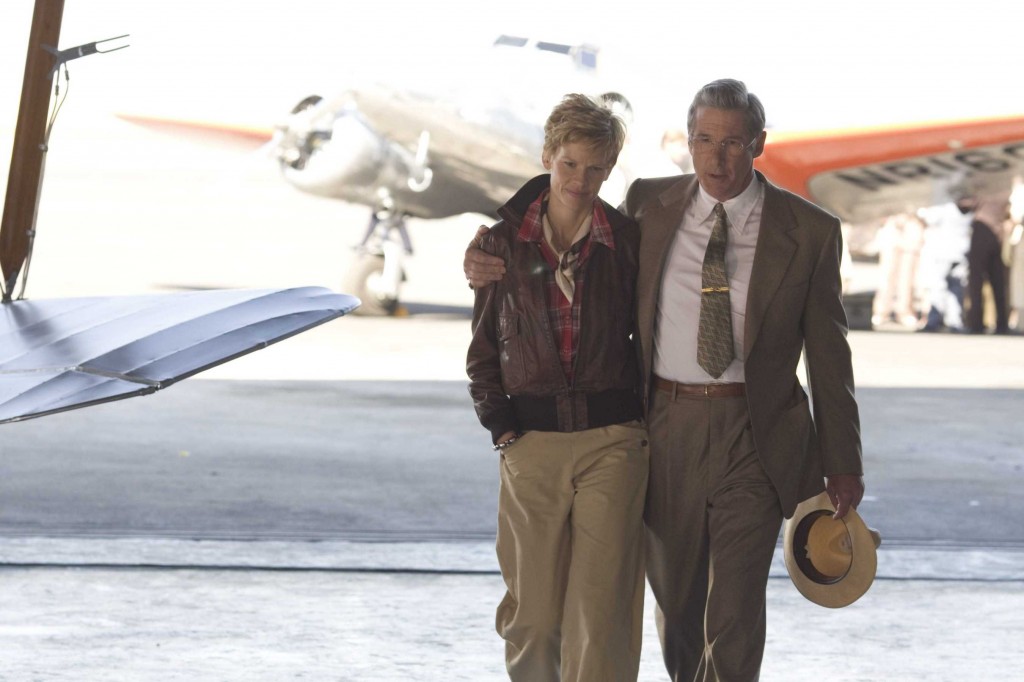