Another Take By Zac: “The Virginity Hit” 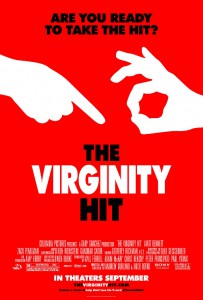 The Virginity Hit is a docu-style sex comedy produced by Will Ferrell and Adam McKay and is the funniest movie of the year so far.

The film follows a group of friends after there last year of high school as they try to get their last friend to take his illusive virginity hit of their virginity bong.  Three of the four have taken the hit and Matt is the only one left.  But Matt and his girlfriend have plans for their anniversary and his buddy Zack decides to elaborately record the proceedings as he does most everything in his friends life.

That is about as far as I want to go with the plot and really don’t want to talk about the humor much either.  I went into this movie completely cold and was loving the discovery of having absolutely no idea where it is going to go.  It really added to the surprise and outrageousness of the humor that works on almost every level.  The film does show its cards a time or two a bit early to the sharp viewer but I was constantly blind sided by where it went next.  Some of you might be distressed by the handheld “Cloverfield style” of filmmaking but it gives the film a real life feel and intimacy that really helps you connect with the characters.

Staring no one most of us has ever heard of, the cast is really great and the chemistry between them is just marvelous.  The banter is fast, the report between the core is realistic, and we never once will stop and think we are watching a bunch of actors running around.  The film uses the cast to create a sex comedy, a coming of age tale, and a social commentary and some how pulls it off on all levels.  The film is poignant at times and then turns on a dime and is raunchy and hilarious.  Huck Botko and Andrew Gurland write and direct a unique film that deserves to be found by as big an audience as possible.

The cast as I has mentioned is fresh and bound to find a lot more work after people check them out in this.  Zack Pearlman and Matt Bennett are the real finds of the cast though and I expect big things from the two.  Bennett plays the straight man of the group with ease and awkwardly works his way through some ridiculous situations.  Pearlman on the other hand is the fast and silver tongued goofball that has a punch line for everything and rarely, if ever, misses the mark.  Krysta Rodriguez is also quite good as Matt’s “sister” and the two make some really awkward moments between the two work.  Nicole Weaver is also really sweet and conflicted as Matt’s girlfriend and successfully makes you feel for her even when you have reason not to.

In the end, The Virginity Hit is a wonderfully fresh comedy that surprises, goes places you think it won’t, and has one of the best breakout casts of the year.  Everyone in the film is hilarious and you will by into the picture with ease as you are enveloped into this group of friends.  Smart, sweet, and raunchy, the film has something for everyone and while you might dismiss it as childish, remember back to your schooling days and I think you will find that you had a little bit of one of these guys inside of you.

The Virginity Hit is an A-