Another Take By Zac: Film Review: Your Highness 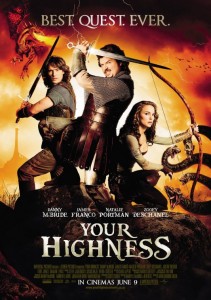 Your Highness is a solid fantasy film throwback that also happens to be quite funny as it lovingly sends up the genres heyday of the 80’s.

I worded that opening pitch to emphasize that I think you should view this film as a throwback fantasy film first and a comedy a close second.  That is not to say that the film isn’t funny, it is very much so, but it is just as much a weird and creative fantasy world for our characters to play in.  Following a pair of prince brothers, Fabious the brave hero and Thadeous the lazy underachiever, the two must set out on a quest to retrieve Fabious’ bride to be with the hopes of Thadeous finally being able to prove himself a worthy prince.  Things don’t go smoothly and the two find themselves getting into a lot of trouble along the way.

The film was inspired and written by Danny McBride who is a self proclaimed lover of fantasy films and that is clear from the get go.  The film is actually quite the solid fantasy picture and is a send up of the genre in the vain of Edgar Wright’s Shaun of the Dead.  It finds the humor in the genre and has fun with a lot of elements that fill the films.  From Muppet based characters, dwarves, practical costume beasts, and lots of swords and sorcery, the film feels right at home with the films that influenced it.  The world design and art direction on the film are really solid and inspired and I actually wish the film would have gotten to play with the fantasy elements more than it did.

I also think the comedy, as funny as it is, could have been a bit grander as well.  Now I don’t think this is really a knock on the film, it just was more of an even and solid mix fantasy and humor than I was expecting.  The film isn’t all about the jokes, and I think this is a good thing in the end, so go in knowing that the film will make you laugh plenty but aims to be a fantasy film as well.  The humor ranges from sweet to crude and there are a couple of funny bits that we haven’t really seen before.  The humor fits wonderfully with the fantasy genre and they have plenty of fun with the conventions that filled some of those 80’s “classics.”

The cast is full of a lot of familiar faces and the leads are played by James Franco and Danny McBride.  Franco plays Fabious, the chosen one in the family, and he plays a sweet and daring leader of the kingdom.  He doesn’t play him arrogant or privileged though and the character has an interesting depth and appreciation for his brother’s life.  That life of Thadeous is played wonderfully by McBride who even though he is a screw up is not an idiot.  Between his pot smoking and attempts to be women, McBride is on the nose with many of his assessments of the world around them.  If you are a fan McBride you are going to enjoy him here and he works wonderfully with Franco.  Natalie Portman and Zooey Deschanel star as the film’s female leads and both do a fine job as well in their parts.  Portman doesn’t get as much fun stuff to do as her counterpart but she nails the hot warrior woman role that she needs to be here.  Deschanel on the other hand gets to be really weird and silly here in a role that is against type for her; still gets to sing though!  Toby Jones and Damian Lewis both fall in a pair of supporting roles and they do some good work but are fairly limited in their screen time.  Making the most of their limited screen time is Justin Theroux as the evil sorcerer villain who might be the funniest character in the film; steals a lot of scenes.

In the end, Your Highness is a solid amalgamation of fantasy and comedy that works on both ends.  The fantasy world is very well realized, the effects, sets, and art design are great, and the humor never let’s up.  Director David Gordon Green has assembled another winning comedy here after his last effort, Pineapple Express, and he is quickly becoming a force in the comedy world.  A fun and silly good time that will appease many a comedy or fantasy fan.

Your Highness is a B+