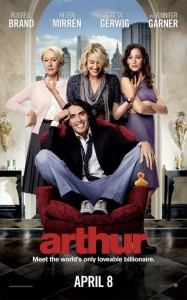 Arthur is a fine little romantic comedy that is fairly paint by numbers and doesn’t bring much new to the genre, but the cast makes it an entertaining enough affair that it is worth a watch if a fan of them.

The film is a remake of the 1981 film of the same name, which stared Dudley Moore, but I have never seen it so we won’t be comparing that here. This film stars Russell Brand in the title role as Arthur who is a rich and perpetually functionally drunk that is undereducated and has nothing to do but find ways to blow his families money.  After his latest stunt causes faith in the family company’s future to drop, causing negative financial ripples, his mother arranges his marriage to a well-to-do heiress, Susan, whom will take over the company along with Arthur when the time comes. Arthur unfortunately has just met his potential love of his life, Naomi, and he is forced to juggle the two women as he will be cut off from his wealth if he does not marry Susan.

The film hinges on your likeability of the leads and I quite like Russell Brand. The trailers have been playing up the manic Russell Brand that people think to seem he is, but as an actor he has quite a bit of range and his Arthur is far from some manic idiot.  Arthur is quite the affable and generous character that really just doesn’t know what to do with himself, and Brand plays it great.  Sharp and quick witted, Brand is almost too tough to keep up with he gets going so fast and he is consistently funny.

Matching him is Helen Mirren who has a wonderful chemistry and back and forth with Brand as his nanny, Hobson.  The two form a very nice relationship that is very mother/son, as is intended, and it is strong enough for an emotional payoff needed towards the end of the film.  Mirren has some great comedy chops as well and it is nice to see her show it off here.

The film is a tad long, but I think a part of that has to do with the conventionality of the pictures later half. Most of the humor in the film hits though and the film doesn’t rely on cheap or crude gags for humor.  The script is solid and Brand brings his own bit of character to the humor. Brand also works really well with both of the younger women in Arthur’s love life.  Jennifer Garner plays Susan and gives Brand a wonderful women to run away from.  Garner does it with out being a truly awful human being as well, just someone that doesn’t care what the man thinks. Greta Gerwig on the other is sweet, adorable, and quirky as Naomi and she and Brand have believable and playful chemistry.  Gerwig has been great in everything I have seen her in and she gets the most emotional range to work with and comfortably nails it.  Her character has a couple shortcomings that can’t be ignored and is motivated by nothing more than the fact that she has to end up with Arthur in the end.  Let me ask you ladies, would you jump into a relationship with an openly consistently drunk individual; no matter their charm or ridiculous wealth?  Maybe just answer that to yourself.

The film’s third act devolution to predictable and clichéd rom-com will be detrimental to some but I think it gets through it well enough fairly unscathed.  Again, the charm of the leads carries us through, but if it threw a curveball at us and tightened things up a bit it could have been a solid film through and through.

In the end, Arthur is an enjoyable film but it could have been a bit something more.  The film plays it fairly safe but Brand and Gerwig liven things up a bit.  It is nice to see Brand continue to do solid work and hopefully Gerwig gets some more main stream work with this.  It isn’t your run of a mill rom-com but it isn’t going to do anything you don’t see coming either.  If you like the cast and want to see the film it is worth your time, but I don’t think it is going to change many a detractors’ mind who have been made up before seeing the film.

Arthur is a C+