Another Take By Zac: Film Review: The Ides of March 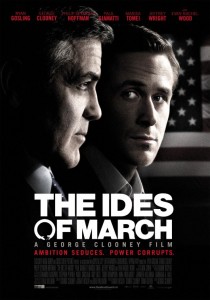 George Clooney’s latest directorial effort, The Ides of March, is sharp, timely, and impeccably executed by his actors and team behind the camera.

This political amalgamation is meant, I think, to open the eyes of average Americans to the cluster fuck that is the political theater going on behind the scenes in this country.  Clooney uses the opportunity to not only enlighten less informed citizens but also throw out a pretty compelling political narrative of these times.  His fictionalized Democratic candidate, Governor Mike Morris (played by Clooney), seems to be standing up for the ideals Clooney himself would be and Clooney does so with out holding Democrats on a pedestal.  The film’s plot surrounds Morris’s #2 campaign manager, who when given a feeler by the competing campaign sets in motion a series of events that form the twisting narrative of the picture.  The film from there supplies some laughs, a few shocks, and plenty of intrigue, all at a blistering pace, that shapes out to one of the finer pictures of the year.

As many good liberal ideas that Clooney lays out here he counters almost all of them by calling out the Left for their many shortcomings in the political game.  And that is a major take away of the film, it is all a game no matter what side you are on, and we need a fundamental political change in this country if we want to feel good about where we are going.  Clooney paints a picture that it is impossible to govern on just smart ideas and doing what is right for this country and that politics today require far more than good natured will.  This isn’t some great revelation, its been this way for all of time, but now is a time where that frustration seems to be boiling over across the globe.  You can feel Clooney’s frustration with the system and he weaves it in wonderfully with his thriller narrative.

The film’s entertainment merits are just as sharp as the political commentary and Clooney again returns to the top level of directing we expect from him after Confessions of a Dangerous Mind and Good Night, and Good Luck.  Clooney doesn’t reinvent the genre, nor does he try too, but the film is so wonderfully assembled, shot, and acted that it immediately goes toe to toe with any political picture that I have seen.  The film is beautifully shot, edited, and paced, features a great score from Alexandre Desplat and is wonderfully acted by everyone involved.  Clooney also seems to have been influenced by some of his recent directors as well, with the film’s look seeming to be influenced by Jason Reitman, Tony Gilroy, and Anton Corbijn and integrating them all wonderfully.

The cast for this film is incredible.  Clooney, as aforementioned, plays the political candidate and he couldn’t possibly be more right in the part.  Charming, handsome, charismatic, and ruthless when he needs to, Clooney nails it, and while not the lead he shines every time he is on screen.  Ryan Gosling gets another great part here, his third this year, and he matches everyone Clooney puts him against.  In almost every scene of the film, Gosling is able to carry the picture with ease, and while his arc from idealist to cut throat is a tad rushed, he makes it work.  This film also has Phillip Seymour Hoffman and Paul Giamatti in the same film, which is like a wet dream for this film lover, and they both are as great as ever; they even get to be in the same scene!  Marisa Tomei and Jeffrey Wright are great here as well in small parts but Evan Rachel Wood stands out as much as any of the supporting players.  Wood has wonderful chemistry with Gosling and she gets a lot of juicy material to work with.  Wood really does some great work in her last couple scenes and she does it all, mostly, without dialogue.  The film is an actors’ showcase to say the least and is worth the price of admission alone.

In the end, The Ides of March is a fantastic political thriller that lets Clooney show off in front of and behind the camera.  With a strong political voice and thrills, twists, and turns along the way Ides of March informs while it entertains.  Featuring great acting, sharp writing, and excellent direction Ides of March is not to be missed.

The Ides of March is an A-