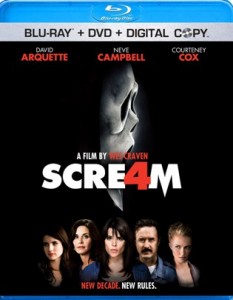 There’s been a lot of bad blood (pun intended) surrounding this fourth installment of the Scream franchise. Many have said the characters are less developed than the first, that it focuses too much on comedy and that it doesn’t have the same scare factor than the original. It seems like these critics have forgotten what made the original so popular. Scream wasn’t a phenomenon because of it’s Oscar winning screenplay or Exorcist level scares, it was popular because it was fun, exciting and sharply written. Scream 4 is all of things.Scream 4 takes the essential elements of the original film and updates them for the current generation of teens. It seems like there might have been a conversation early in the development in this project where the filmmakers asked themselves if they should continue on the path that Scream 1-3 laid down or start anew and take the “meta” aspect of the film to it’s N-th degree. I’m glad they chose the latter. The opening scene in this film shows just how meta it can be, and I really appreciated it.

Major studio horror films have recently become less interested in providing scares and more interested in creating a certain atmosphere or brand. Scream 4 captures that brand. The Scream films are a “franchise” in every sense of the word. If you go in to this film expecting anything more than that, you’ll probably be disappointed. Otherwise, it’s a lot of fun.