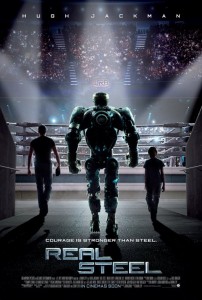 Real Steel is a slick and polished sports flick that features some great effects, solid acting, and nothing you haven’t seen already.

This is what you think it is; a tried and true underdog sports story.  Only this time with giant robots and if that is what you are looking for I am sure you will be entertained.  The lead robot, Atom, is likable and easy to get behind and it’s relationship with the boy in the film, Max, gives a strong heart to the movie.  Though, Hugh Jackman’s Charlie is the lead of the film here and his journey from scumbag to solid father figure has surprising depth and hits all the beats you expect.  If you haven’t figured it out yet, don’t go in expecting some reinvention of the genre.  Our characters learn something, the hero fights the unbeatable opponent, and things end relatively positive in the end.

So why lay out the redundancies of the genre this film hits so plainly in the opening? First of all, you shouldn’t bother with the film if you can’t get over conventions in cinema, because this is full of them.  But I mention them because the film is able to overcome those conventions, for 2/3 of the film, giving us an entertaining exercise in the genre; with giant boxing robots.  Shawn Levy delivers some of his best work yet and he makes the most of this high concept premise.  He is greatly aided by some tremendous special effects, seemingly both digital and practical, and he shoots them beautifully making the film quite sharp to look at.  The action is easy to digest, feels like classic boxing, and delivers plenty of violence fit for a family audience.

The film does seem to be skewing for those family audiences, it is very accessible to them, but I still enjoyed myself from, mostly, start to finish here.  The film does succumb to some third act clichés but the final battle more than makes up for these moments of stupidity.  The film begs the question though; why must we always break apart our leads?  Create conflict naturally; don’t take the cheap route by arbitrarily putting a wedge between our characters just so we can bring them back together again.  All this said, sports fans should be able to get into this picture quite easily and the effects/action make it worth the trip to the big screen if you think you might be a fan.  Danny Elfman’s score is worth mentioning as well and the effects work by Digital Domain is really quite remarkable; I couldn’t tell practical vs. digital.

The actors in the film are all solid, with Jackman getting to show quite the range for a role in a robot boxing movie. Staring off as a complete scumbag, Jackman is given an opportunity to evolve and gives the character some depth with his boxing background story.  Jackman is charismatic and, surprisingly, still likable through all this and when he shows flashes of Charlie’s boxing background the film really shines.  The co-lead of the picture is the young star Dakota Goyo and he is surprisingly charismatic, going toe to toe with Jackman at times.  There are a couple of wavering moments from time to time from Goyo, but for the most part he is a lot of fun.  Evangeline Lilly is a cute gym owner that has long held the eye of Jackman, but she is good enough in her run of the mill role to make you connect with her and their relationship; even if they forced it in the third act.  Anthony Mackie, Kevin Durand, and Hope Davis all have nothing to do here, a shame for such a strong trio of actors.  Mackie in particular deserves better as he has not been given a good part since The Hurt Locker.

In the end, Real Steel is entertaining fare that families and sports fans can both really enjoy.  Big and spectacular effects, good acting by it’s leads, and features a heart at the middle of it all that will for sure suck it’s viewers in.  Popcorn entertainment for sure, but solid, well executed popcorn.

Real Steel is a B-