Another Take By Zac: Film Review: Just Go With It 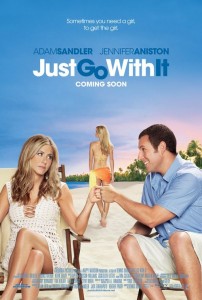 Just Go With It has a couple of funny moments sprinkled into a contrived and implausible mess of a plot that is only kept afloat by its appealing group of actors.

Sandler’s latest comedy romance flick is a bit confused with what it wants to be as it openly embraces broad physical comedy as well as trying to be a sweet romantic comedy.  The film becomes a huge contrived mess by the end and it all starts with Sandler’s character, Danny.  Danny likes to wear his wedding band, which he never got to use, to pick up hot sympathizing girls after he sells them on a sob story about his marriage.  At a party he picks up Palmer (Brooklyn Decker), a young blonde school teacher, but doesn’t have his ring on and forms a real spark with her.  After spending the night on the beach together, Palmer, discovers Danny’s fake wedding ring in his pocket which forces him to create a lie about it in that he is getting a divorce.  From here he recruits his assistant, Katherine (Jennifer Aniston), to pose as his ex only to discover that she is actually quite the looker as well when she isn’t dressed up work clothes.  Before we know it Danny’s cousin and Katherine’s kids are involved and the mess gets even bigger; and I haven’t even thrown in the couple from Katherine’s past that further complicates things.

Now let’s get the positives out of the way, there are a couple laughs in here.  The broad stupid humor and the romantic side of things both deliver on a few occasions.   But more often than not the film falls flat at its attempts at humor.  Sure Nick Swardson is fun as the silly cousin, but his gimmick goes so far over the top that it is hard for him to even salvage.  The kids are also quite funny as well but there is only so far that the same gag will win the crowd over.  The romantic side of things provide for most of the films finer moments with Aniston and Sandler having surprisingly strong chemistry even if the film doesn’t give us much of a reason to believe their blossoming relationship.  The best parts of the film for me were when Kidman shows up on to the scene as Katherine’s frienemy from high school.  Kidman gets to have fun and be rather silly and it makes me wish she took more roles in this vein.

Things that don’t work are even more plentiful. (Spoilers for those who have never seen a romantic comedy ahead)  I feel like the film doesn’t do nearly enough to justify the winning relationship in the film and seems to be mostly based on looks alone.  To work hand in hand for so long and to have never noticed anything seems next to impossible.  Even more improbable is the loser on the relationships side reaction to all of this.  Actually, we don’t know what her reaction is as the film decides to completely avoid the situation in hopes of keeping things as rosy as possible.  I am just so sick and tired of romantic comedies completely screwing over one if its lovers for no real reason; and I am sorry that the little coda did not make me feel any better about the situation.  I mentioned that the broad humor just really doesn’t work all that much and you never really can root for anyone involved to end up together; both relationships are entirely unbelievable.

I have touched on the acting through out the review and it is probably the strongest part of the film.  Sure Decker doesn’t blow anyone out of the water but she only makes you cringe once or twice.  Same for Dave Matthews as Kidman’s beau but he is such a shell of a character that he has no room to really do anything; though a gag surrounding him did make me laugh the hardest I think.  Sandler and Aniston are both fine in their parts as well with Aniston turning in some of her most fun work in a while.  You can tell the cast was having a good time; it’s just too bad it couldn’t have been translated into a good movie.

In the end, Just Go With It is quite the mess that doesn’t do much with the talent involved.  The relationships are contrived and unbelievable, the plot is all over the place, and the web of lies that is constructed is just absurd.  It’s neither a broad Sandler comedy, nor a sweet rom-com from him ala 50 First Dates or The Wedding Singer.  The film should have just embraced the romantic comedy side and tried not to make things so convoluted.  If you do go see it, at least you get to see three of the world’s most beautiful women in bikinis?