By now, everyone is probably aware of the fact that the deadline to re-sign Albert Pujols has passed. What does this mean, exactly? 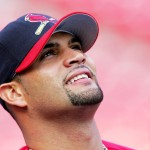 Pictured: Albert Pujols. What, you expect a clever caption for every picture?

Pujols has repeatedly said he will not negotiate during the course of the regular season and playoffs to avoid carrying distractions onto the field. If the Cardinals do not make the playoffs this year, he’d presumably have the course of the playoffs and an additional five days after the end of the World Series to negotiate exclusively with the Cardinals. If the Cardinals play in the World Series, there would be a five-day window immediately after the conclusion of the series during which no team could talk to Pujols but the Cardinals. After these five days are up, Pujols would become a free agent.

Part of me’s angry/frustrated/sad at both parties involved. Pujols is well on his way to becoming a legend, perhaps in a few years entering the “greatest player ever” discussion. He is, however, but one player among 25; no man completely transcends the game. He has established a reputation of being an integral man, one who loves St. Louis and wants to remain a Cardinal. This reputation will no doubt take a hit from fans (hello, Facebook statuses), and perhaps justly so. St. Louis is a mid-level market with a mean yearly salary of less than $40,000. Asking the team to give a record-setting contract for ten years is beyond the course of reason, unless they dump the entire team and promote their AAA roster from Memphis. His age and injuries work against him. Statistically, many premier players begin their decline around the age of 33, and Pujols just turned 31. This isn’t to say he couldn’t buck the trend or still be great after 33, but at the age of 41-42, the chances he’d be worth $30 million are Lilliputian. Pujols is generally considered one of the financially smartest players in the game; if he can’t survive on 25-30 million for seven or eight years, I’d like to see his tax returns.

On the other hand…it’s Albert Pujols. The man has done nothing but dominate baseball for the past decade. There is a chance we will never see another talent like him in our lifetime. He helped take a team that made one playoff appearance in the 1990’s and turned them into perennial contenders. He has become a fan favorite and the face of the franchise. According to reports, the offers the Cardinals extended never would have put him in the top five of highest-paid players, which he deserves. If they were going solely for seven or eight years, they should have at least offered to make him the highest-paid player in the game.

I’ve said all along the deal that would make the most sense to me would be to offer seven or eight years, $30 million a year, with vesting options for perhaps two years after that. A vesting option would be picked up automatically based on performance on the field, such as hitting 30 HR in the final or penultimate season of the contract. This way, Pujols would demonstrate he is still worth the money. Of course, Pujols could counter that he has already earned it.

So what happens if he hits the free agent market? I think it’s safe to say every team would be interested. But will any team offer him the ten years he’s seeking? Who knows. But if he’s willing to concede a year or two off the end, there’s no doubt teams will pay him upwards of $30 million a year.

In rejecting the offers, Pujols is placing a big bet on this season. If his production begins to wane or he is injured, his appeal will begin to diminish. He’ll still find employment next year, of course, but the doubts people have kept on the fringe of their minds will begin to gain footing. On the other hand, if he has a career year, as many players in their contract year tend to do, he could end up with an absurd contract Warren Buffett would be envious of.

I refuse to give up hope. I get the feeling in the end, a middle ground can and will be found. Pujols isn’t an idiot. He knows how tarnished his reputation would be in St. Louis if he went after money. If he truly does care about his perception and reputation as a person, he will take this into consideration. Bill DeWitt and John Mozeliak know they’ll probably be burned at the stake if they allow him to leave.

Still, the possibility of him leaving is real. Some might boo him or hate him. Not me. I’m a fan of Pujols, a fan of the Cardinals, a fan of the game itself. As a fan, I consider myself lucky to have the chance to see him play on a daily basis. His loss would be a crushing blow, but I have come to appreciate what he’s done for this franchise.

Feel how you wish about him as a person. As for me, I’ll be glued to the couch, or my seat at the game, watching every at bat as though it’s his last in a Cardinals uniform, because from here on out, it very well could be. I would suggest you do the same.