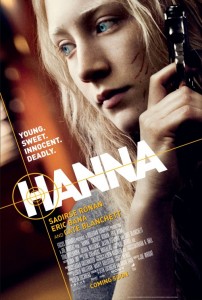 Joe Wright’s latest, Hanna, is an assassin picture on the surface but at its heart is a film of self discovery after being trapped in isolation your whole life.  It all works really well, but after one viewing I feel like it is missing that special something to make it incredible.

The film is fun, suspenseful, and moves at a whip’s pace and I have next to nothing to complain about the film.  But something is missing that makes me go, “that movie was incredible.” as we follow Hanna from her isolated life in the woods of Finland and out into the real world as she travels across Europe we get to watch her grow and discover the world and everything in it.  The girl was raised with nothing to inform her about the outside world except her father, an encyclopedia, and a ragged copy of some Grimm fairy tales that was her mothers.  Hanna and her father, Erik, are in hiding from the US government, specifically a Marissa Wiegler, who wants Hanna alive for mysterious reasons.
The film is a departure for director Joe Wright, who is best known for Atonement and Pride and Prejudice, and he hands the action in the film quite well.  The film isn’t an action flick by any means, but the action beats in the film are executed with precision and style.  The most impressive moment might be a classic Wright single take shot that starts with Erik at a bus station above ground and, after he realizes he has been marked, ends up in a subway in a one on many fight.  The shot is fantastic and while there are a couple of digital tricks the moment is near perfection.  And the film is full of moments like this, which just gets your heart racing as our heroes fight for survival.
The film also has some excellent villains in Wiegler and especially her hired hand Isaacs.  Isaacs is played by Tom Hollander and the character is a bizarre and nasty man that let’s nothing get in his way.  His stature might not be an intimidating presence, but he slowly becomes more and more terrifying as we discover the depths at which he will go to for his prize.  Hollander deserves lots of credit for creating such an odd yet threatening villain.
The film also has a very good sense of humor and while one character might be a little overkill most of the comedic moments resonate wonderfully.  Saoirse Ronan plays the discovery with just the right wink of humor and heart which feels perfectly natural for the character.  Ronan as a whole handles everything thrown at her with ease and is a bad-ass from start to finish.  Like I mentioned though, the film isn’t all action, and she gets plenty of moments to shine as Hanna discovers music, friendship, family life in the real world, and more.  This is the heart of the film, Hanna’s discovery of the world, and I think knowing that going in will really help further your enjoyment of the picture.  If you are looking for action, there is plenty here, but it’s this sweeter side that really fills the film.  And this caught me off guard, and while it is all executed marvelously my anticipation for something more action heavy might be that thing that is keeping me from calling this movie incredible; and also something that might be corrected after a second viewing.
There are a couple nitpicks I have with the film. Hollander and his cronies might get around a little too conveniently, as do a couple characters escape death/arrest with maybe a bit too easy.  My biggest complaint is the lack of verification on the fate of a certain group of characters.  We can infer the worst based on the fate of a character at the end of the film but some acknowledgement of any kind would have been appreciated.  Like I said, I was expecting another action beat or two in the film, but there is plenty of action here and I think I might have just been deluding myself into expecting more.
The rest of the cast I haven’t mentioned yet are all quite good as well, if a bit under used.  The most underused are Olivia Williams and Jason Flemyng as a couple of parents on holiday across Europe that Hanna tags along with.  Both are great in their limited screen time I just wish we could of had more of them.  Eric Bana plays Erik, Hanna’s father, and he makes the most of every minute he gets as well.  Spending much of the film in shootouts and fisticuffs, Bana is more then up to the task and seeing him here just makes me wish he was in more films.  Cate Blanchett is also great as usual as Wiegler and she gets to play a nasty and fun role that is unlike anything she has done in recent memory.
In the end, Hanna is one of the best and finely executed films of the year.  It is fast paced and has plenty of heart racing moments that will sweep you up into the film.  My something, something that is missing from the film is really pretty much an invalid criticism and as I write this review I find myself shaking at my head at myself at holding anything against this film.  Like all of Wright’s films the execution is impeccable and features plenty of visual flourishes, plus you get possibly the best turn yet by Saoirse Ronan.  See Hanna, it is a unique and visual feast that doesn’t disappoint. (I just need to shut up because I am wrong)
Hanna is an A-