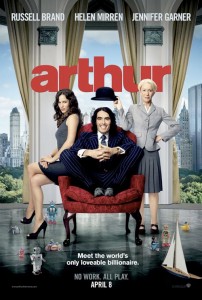 I might be committing a cinematic foul by saying this, but I have never been a fan of the original Arthur.  I can see why people do, but I don’t think there is a lot of character progression, and I will state even more boldly that I was never a fan of Dudley Moore in the role. I found Moore to be rather boorish and annoying, rather than charming and likable. So, with that out of the way I can review the remake of the Dudley Moore film, Arthur.

Arthur Bach is someone you shouldn’t like. He’s a drunk, spendthrift, and most of all he’s filthy rich. Despite all these facts he’s genuinely witty and charming. Despite the envy everyone has over living the life of Arthur, you can’t help but notice he’s quite good at it. Who wouldn’t want to pretend they are Batman and cruise around town for a night in the Batmobile? No, just me? Unfortunately for Arthur, such frivolity is frowned upon in modern business, and to keep his stake of the fortune he must marry up, and settle down to calm investors. Arthur’s luck is running out as he finally meets the woman of his dreams, while the woman of his nightmares chains him to his fortune.

Arthur rests solely on the shoulders of its star Russell Brand.  If you are a fan of his humor, then you will probably love the film. If you’ve found him grating in other recent roles like Get Him to the Greek, then you are probably best off skipping it.  I rest in the former category, and enjoy Brand and his unique comic skills.  He carries the movie quite well, and has a lot of chemistry with Helen Mirren, who takes over the role of caretaker/nanny, Hobson. The two banter well, and it is because of this fact that the third act of the film works so well.

However, one of the faults clearly lies with the chemistry between Brand and c0-star Greta Gerwig, who never seem to quite connect. Gerwig’s performance is easily the weakest of the bunch, which is sad since she has shown strong chops in other recent roles. She comes off as hokey rather than genuine, and daft rather than sweet much of the time.  Although, don’t get me wrong, she is still passable, but doesn’t seem to rise up to the level of Mirren and Brand.

It is hard to review a remake of a comedy classic.  When a film is beloved by the public for many years, it is hard to inhabit a role and make it your own. Many people will only assume, “it isn’t as good as the original”. If you’ve never seen the original, and have nothing to compare it to, this remake is a solid one that improves upon the character in many ways.