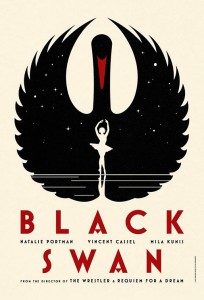 Black Swan is another fantastic entry into Darren Aronofsky’s filmography that is driven by a wonderful lead performance by Natalie Portman that could very well possibly be my favorite film of the year when it is all said and done.

The film follows Nina Sayers who has been a background ballet performer in an elite New York company that finally gets her shot at stardom when the company’s lead decides to “retire.”  Nina gets her shot in the company’s next performance of Swan Lake and her life begins to parallel her character of The Swan Queen. Nina applies a lot of pressure on herself and beyond that she lives with her mother who is overbearing and is clearly living vicariously through her daughter.  Added to the self and parental pressure is the extremely competitive nature of the world of ballet and these elements all thrown together provides for a volatile environment for Nina to try and rise to stardom.  So when her director keeps getting disappointed in her work and a new talent from San Francisco shows up in the company, Nina finds herself in a stressful situation.

I am not going to dive into the plot any further but I will warn you now that the film is weird, it dips into the supernatural, and will have you asking yourself “what the fuck is going on?” on more than one occasion.  Luckily the weird stuff is used in just the right amount to intrigue but keep the film a dramatic psychological thriller and not jump genres into horror or supernatural.

The film has romantic intrigue, beautiful dance sequences, an incredible mother/daughter relationship, and plenty more for just about anyone to find something to grasp on to.  The film’s genre bending is handled so well by Aronofsky that I don’t know how many people would be able handle it as beautifully as he does.  Aronofsky’s technical prowess is incredible in this picture and Portman’s ability to dance her way through some of the extended takes he thinks up is impressive and was surely exhausting.  Towards the end of the film there is also a long take that institutes a fair amount of CG/special effects as well and it is pulled off flawlessly.  The way Aronofsky hides his camera from casting shadows and from the millions of mirrors in the film is a marvel in and of itself.

Getting to the cast in Black Swan is a joy to right about as all of the principle actors here are just fantastic.  Portman is exceptionally convincing in her dance numbers to this untrained eye and goes all out here in every element of her role.  From the dance numbers, the interactions with her mother (Barbara Hershey), the fragility of Nina, and especially her work with Mila Kunis and Vincent Cassel, Portman is afraid of nothing here.  Cassel just radiates through the screen and in a couple of one on one moments with Portman he will confuse us as we don’t know how we should really be reacting to him he bring such a duality to the character.  Kunis continues shine here as she has in recent work and has made a complete 180 on my impression of her in only a couple of films.  The smallest of the supporting roles, Kunis, has a potentially awkward role to play and to go into it more would be to spoilery, but she pulls of the two sided necessity of her performance wonderfully.  We can never get a read on her even though we should clearly see who she really is.  Hershey on the other hand is terrifying as Nina’s mother and plays the moment where our opinion turns on her so well it was shocking.  She plays the part so beautifully as well that we can’t help but reassess her as Nina’s journey unfolds.

In the end, Black Swan is a movie I can’t stop thinking about and had me wishing they would run the film back the instant it ended.  I can not wait to see it again to just marvel in the amazing performances by Portman and her co-stars and especially to watch Aronofsky’s beautiful vision unfold again on screen.  Black Swan is a weird, dark masterpiece by Aronofsky that sits above all but one of his works so far and shouldn’t be missed by anyone.

Black Swan is an A