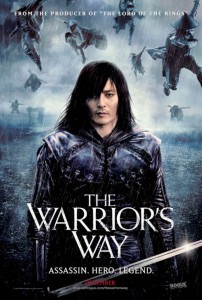 Too often in action films you have to choose – gunslingers or swordfighters, comedy or tragedy, western or martial arts…today, the indecisive masses have their film. Maybe you’ve heard the term “Spaghetti Western”, well The Warrior’s Way is the ”Ramen Western,” a delightful mix of action, comedy, gun play and best of all…sword play. While the names Kate Bosworth, Geoffrey Rush and Danny Huston may not conjure images of wild-west ninjas, they certainly pull it off quite well. Keep in mind that despite the typical Oscar fare being released this time of year and the fact that Geoffrey Rush is an Oscar winner and Danny Huston will inevitably be a future Oscar winner, this movie certainly won’t be winning any Oscars this year. However for what it intends to be, The Warrior’s Way certainly hits all points needed.

The story is familiar, the-worlds-best-swordsman-ever (Dong-gun Jang) is forced to make a noble choice and in turn, betrays his clan. He flees to isolation and finds himself in a small circus town with a dark past. He falls in love and is forced to protect the town and show down against the very clan he was fleeing from. Those details alone will undoubtedly bring comparison against High Noon, Shane and Seven Samurai to name a few – throw in the visual effects, fighting style and overall feel of the movie and you have more comparisons to films like 300, Kill Bill and 2007’s Sukiyaki Western Django (Never heard of it? Look it up.)

The Warrior’s Way incorporates a certain self-aware camp with spectacular visuals and eye-popping fight scenes into a very adequate story. Actors feel committed to their roles and the story is well paced. The Warrior’s Way is the type of movie that will be missed by the vast majority of the audiences, but for the right person it will feel like a true “discovery.”

th the exception of Sukiyaki Western Django, The Warrior’s Way isn’t as good as any of the films it’s likely to be compared with, but for the right audience, which would be any fan of self-aware camp or over the top action movies such as Ninja Assassin or Kick-Ass…they will love it.