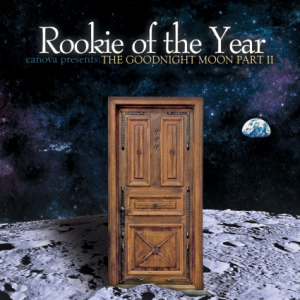 There are some songs/albums that just beg to be played on a summer car ride with the windows rolled down. I could list a dozen of each that I’ve played from my iPod/phone countless times.

Beyond that, though, there are bands whose entire catalogs appear to be written in this manner. On a roadtrip with your best friends? Bust out some Of A Revolution. Having a barbecue tonight, maybe a little bocce in the backyard? You can’t go wrong with “How it is Son” or “All My Heroes” by Oxygen. If you’re into country, you can listen to…whatever country songs are popular. I don’t listen to it.

And so it is with Rookie of the Year, an indie rock band hailing from Fayetteville, North Carolina. Randomly perusing iTunes a couple summers ago, I stumbled upon The Goodnight Moon and was immediately intrigued. My curiosity was piqued by their ability to present simple riffs and concepts, yet convey complex emotions and vivid thoughts. Beyond that, at least for me, it just felt like I was listening to a summer night, four minutes at a time.

The band’s undergone several lineup changes recently, and singer/songwriter Ryan Dunson remains the lone holdover from RotY’s early years. Now, eight years after the release of their first album (and three years after the release of their last full studio album), Rookie of the Year prepare to release their fifth studio album, Goodnight Moon Part II. It’s not a revolutionary album, but it’s a solid effort, with the band sticking to their strengths, and it should garner them support from new fans who missed their previous releases.

As I noted in my last review, bands who experience enough success to release multiple albums face the challenge of producing subsequent albums that display enough progression to show the bands growth while simultaneously keeping the sound that made their fans listen to them in the first place. It’s not an easy amalgam, and even bands who manage to successfully do it from a musical standpoint don’t always succeed when it comes to album sales. For Goodnight Moon Part II, it seems that Rookie of the Year stayed more along the lines of their familiar sound, with a few minor exceptions.

This isn’t necessarily a bad thing; on the other hand, settling in listening to the first few tracks immediately gave me the familiar feeling I had when I first heard them. The lead track, “Everything,” is a barometer for the rest of the album: a simple acoustic riff set against a somber electric guitar in the background. Ryan’s vocals tend to be on the high range, and he’s never been afraid to go falsetto, which becomes readily apparent.

The first single off the album, “Love/ME/Crazy,” takes this concept a step further and introduces drums along with a catchy riff throughout the intro and chorus. “I can’t believe all the bridges I’ve burned/or the lessons I could have learned/so easily,” Dunson laments. It’s an excellent choice for a single, a perfect example of the band’s usual mix of contemplation, angst, and optimism set against major chord progressions.