‘The Addams Family’ Musical Turns the Fabulous Fox into a Kooky and Spooky Good Time! 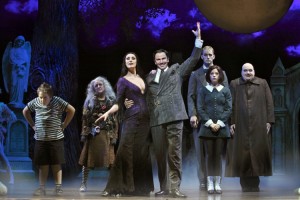 Creepy and kooky? Check. Mysterious and spooky? Check. All together ooky? I believe so, but in a good way. Charles Addams’ most beloved work truly becomes real, like ink on paper coming to life before your eyes, in The Addams Family – a new musical now playing the Fabulous Fox Theatre in St. Louis.

The show is based upon the family that everyone knows and loves, but features an all new story. Wednesday Addams (Cortney Wolfson) is growing up, as daughters seem to inevitably do, and has fallen in love. Her parents Gomez (Douglas Sills ) and Morticia (Sara Gettelfinger) have never met her boyfriend Lucas (Brian Justin Crum) or his parents, so she arranges to have a “normal” dinner to introduce them all. With the help of Uncle Fester (Blake Hammond), Grandma (Pippa Pearthree) and her brother Pugsley (Patrick D. Kennedy) – Wednesday turns a dinner party that is anything but normal into a night that the audience will never forget.

This new musical was written by Marshall Brickman and Rick Elice, who were responsible for the 2006 Tony Award-winning Best Musical Jersey Boys. They based this new story solely off of the cartoons from the New Yorker, avoiding any influences from the television shows and films. The script is well written and very clever, with plenty of jokes throughout – at many of which you just can’t helping laughing out loud. Andre Lippa is responsible for the music and lyrics, most of which are just as clever and have the audience snapping along before long. Choreographer Sergio Trujillo does a great job with the dance numbers, and directors Phelim McDermott and Julian Crouch are responsible for pulling off one fun and entertaining show.

The show revolves primarily around Wednesday Addams, and her budding relationship with Lucas. Cortney Wolfson does a fantastic job in the role, exemplifying both beauty and darkness with perfect balance. She has a voice that was meant for Broadway, and lights up the stage during her performances of “Pulled” and “Crazier Than You.” 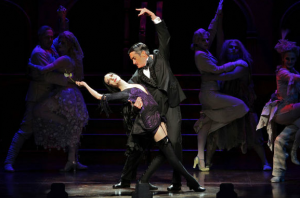 The casting for Gomez and Morticia is truly perfect for the show, and their chemistry is magnificent. Anytime Douglas Sills walks onto the stage, his charisma and Spanish accent captivate the audience. Sara Gettelfinger looks and sounds incredible on-stage as the matriarch of the spooky family. The actress is adamant about hitting the gym while she’s on the road, and looks stunning in her form fitting outfit straight from the cartoon. Her portrayal of Morticia is fantastic, and captures the strength and elegance of the character. Sills and Gettelfinger perform “Where Did We Go Wrong” together, a humorous follow-up to Wednesday’s “Pulled,” and show a lighter side before a more emotional “Live Before We Die” toward the end of the show. They do a great job of capturing the love and romance that exists between the two characters. 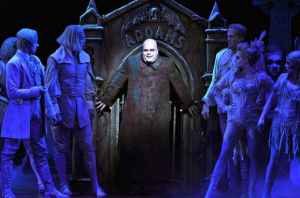 Blake Hammond is hilarious as Uncle Fester. If there is one character that really steals the show, this is it. Uncle Fester is in love, and knowing how it feels he tries to do everything in his power to help Wednesday and Lucas’ relationship to be successful. The audience is full of laughter during most of his scenes. After the entire cast performs “When You’re an Addams” in the opening graveyard scene, Fester recruits the ensemble of past Addams family members to help him on his quest. Throughout the show, Fester and his graveyard gang help to play a Cupid-esque catalyst to the young couple’s relationship from behind the scenes. The costumes and make-up are great for the ensemble, as they really capture the effect that they have risen from the grave. They are pale and white, and definitely look the part.

You can’t forget Pugsley, played by 12-year-old Patrick D. Kennedy who gives a great performance. His character loves to be tortured by his sister, and can’t stand the thought of being left alone without her. The young actor does a fine job in the role.
Pippa Pearthree is a hoot as Grandma Addams, the senile old woman who lives with the family. Tom Corbeil plays a great Lurch with only the few lines he has. But although he speaks few words, his stature and body language create a very humorous performance and he plays the role to a tee.

Lucas’ parents Mal and Alice are played by Martin Vidnovic and Crista Moore. The former is all business, and skeptical of his son’s relationship with Wednesday – where the latter is kind of loopy and lost. Through a series of events which will remain unsaid until you see the show, the two of them change their ways quite a bit and add a great deal of fun to the show.

The Addams Family is one of the most fun and creative shows in musical theater today, and seeing it will make you an instant fan of the creepy and kooky family if you aren’t already. The show is hilarious and non-stop fun, and is sure to make for a memorable night for the entire family. 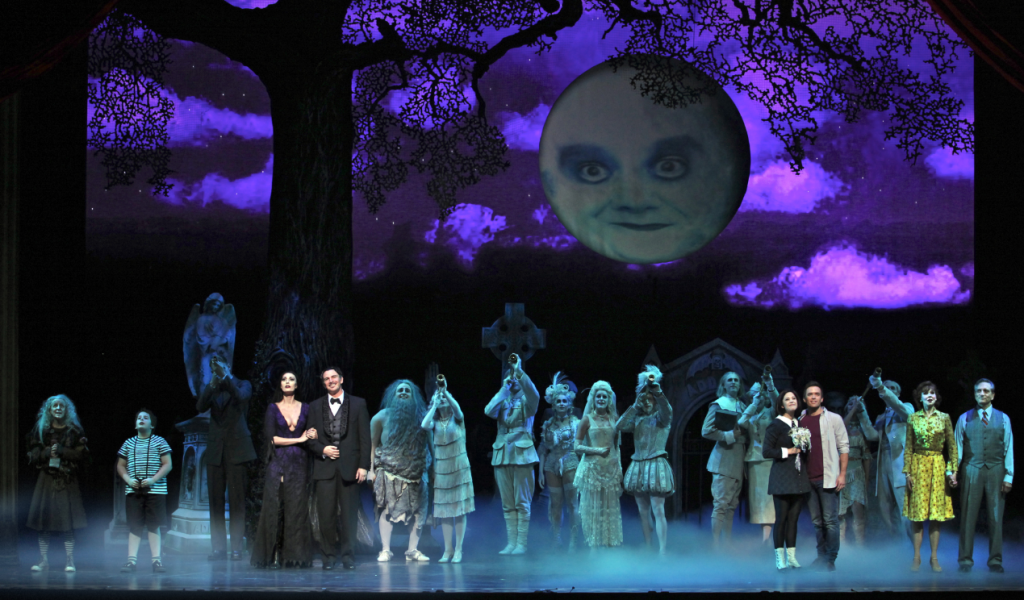 The U.S. Bank Broadway Series kicks off this Wednesday with The Addams Family, playing from September 27 to October 9.  Performances are Tuesday-Saturday at 8pm, Saturday & Sunday at 2pm and Sunday, October 2 at 7:30pm (additional matinee on Thurs.  Oct. 6 at 1pm). Ticket prices start at $15 & $25 and are available online at metrotix.com or by phone at 314-534-1111. Visit the Fabulous Fox Theatre website for more information at fabulousfox.com.