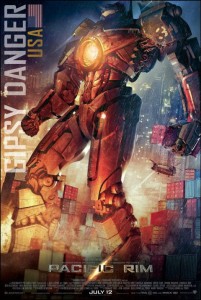 This week sees the release of Pacific Rim.  If you’ve ever wondered what it looked like when Guillermo del Toro played in the bathtub, then this is the movie for you.  He took his Transformers and had them fight his Godzilla action figures, and I bet he was grounded for a week after his mother saw how soaking wet the bathroom rug was.

Read our reviews of Pacific Rim here and here.

The original is a much beloved classic sci-fi film; the kind of movie that showed sci-fi was more than just mindless entertainment for children.  Filmed on a shoestring budget, the 1951 version went on to become a film classic with its anti-nuke message (although then they were technically still atom bombs).  However, in 2008 “Klaatu barada nikto” became “Keanu barada nikto” and we got big movie stars and a budget that probably rivaled our nation’s GDP for the year of the original’s release.  It’s not often a critic gets to say this, but: Keanu Reeves is perfect in this film.  Has there ever been an actor better suited to play a passionless, monotone automaton?

While it’s a standard complaint from film critics, The Day The Earth Stood Still really is a film that did not need to be remade.  It was a product of its time.  With its cold war metaphor and Christian allegory, it was an A-film amongst a sea of B-movies.  The anti-atomic weaponry message has been updated to (surprise!) a pro-environmental message.  Other than making it slightly timelier, it really brings nothing to the table.

Klaatu is bent on destroying mankind in order to save Earth and it’s never really explained why he needed to get off the ship to do it.  In the end, (spoiler alert) he decides to not kill us all because we’re nice.  Yep, that’s it.  We’re nice.  While that rational might make a modicum of sense when determining whether or not mankind will embark upon nuclear Armageddon, it seems particularly nonsensical when determining our ability to be good stewards of the environment.  While I really don’t feel like weighing in on the global warming debate, taking the film at face value, I don’t think niceness would really overcome global destruction.  But then, I’m not Klaatu… and apparently we’re all better off for that.

We’re clearly meant to feel morally superior to the government operatives.  After all, they want to kill and/or imprison Klaatu.  But the guy won’t answer the simplest of questions.  You couldn’t get a Blockbuster card with the amount of information this guy is giving up and we’re supposed to feel like the military are jerks for not wanting to let the guy loose on the public?  Not me, man.  I’m all for two the chest.  Let’s not forget that: if Klaatu hadn’t met a cute girl and changed his mind (for no apparent reason), the military was right: he was out to kill us all.  This “inconvenient truth” undermines the movie’s pro-environmental message and it’s never really addressed.  Klaatu was willing to sacrifice the human race in order to save the planet.  I don’t want the planet to die, but if the answer is killing every man, woman and child on Earth, I’m more than prepared to take the planet down with us.

Ironically, the movie was better with a smaller budget.  The lack of money made them think.  All the extra money did, was made them feel compelled to use it.