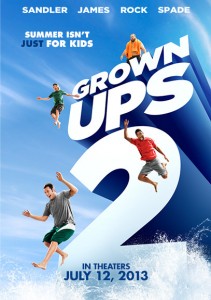 The opening joke of Grown Ups 2 (not opening scene mind you but opening joke) features a deer pissing in Adam Sandler‘s face.  I envy that deer.

The original Grown Ups reunited Sandler with many of his SNL cohorts including Chris Rock, David Spade, Rob Schneider, Colin Quinn, and Tim Meadows.  Kevin James (though not an SNL alum) rounded out the cast in the “fat guy” role which clearly would have gone to Chris Farley were he still alive.  Sandler played a hot shot, super successful Hollywood agent. When his 8th grade basketball coach dies, Sandler and his buddies meet up in their hometown (a quaint lakefront community) for the funeral.  Then they all hang out a rented cabin on the lake.

And that’s it. There you go. That’s what happens.

I mean, they sit around and complain about their lives. But as far as story goes? That’s it.

Grown Ups 2 makes that plot look like positively byzantine.  This time out the film takes place over the course of single day (the last day of school) for apparently no other reason than to drive film critics legally insane.  No attention is paid to continuity or timelines.  Characters seem to magically transport from one end of town to another instantly; perhaps even being in the different places simultaneously.  At the beginning of the film Sandler’s wife (played by Salma Hayek) goes to work then to yoga class and then a dance recital… all before noon.

Wait?  There’s a dance recital?  On the last day school?  I guess that could maybe make sense… maybe?  But then it’s followed up by Sandler teaching his son how to kick a field goal during football practice.  I hate sports but even I know that high schools don’t play football in June!  Eventually Sandler decides to throw an ’80s-themed party on 4-hours’ notice.  So naturally several hundred people show up in full nostalgic regalia.  Oh, and the J. Geils Band manages to put on a free concert with a full stage and lighting.

Furthermore, the film completely ignores its own backstory.  Chris Rock’s character (who was previously a stay-at-home dad) now has a job.  Although the transition is never explained.  Kevin James’ character (who was previously out of work) now is a successful business owner.  Although they never address just how that happened.  And a major character from the first film (Rob Schneider) is completely MIA with no explanation whatsoever.  While that’s not unusual in a sequel it’s a little off-putting considering the entire premise of the film (and I use that term loosely) is the importance of lifelong friendships.

And, in a rare complaint for a comedy, there’s an odd overreliance on CGI; many of the sight gags clearly having been created using a computer which, judging by the look of things, was a TI-99/4A.

The first film, though far from quality entertainment, did manage a certain lazy charm.  The cast had good chemistry and a comfortable rapport and were clearly enjoying themselves.  But none of that is present the second time around.  Previously there were scenes where they friends attempted to one-up each other joke-wise.  These moments were clearly improvised on set and provided a few moments of genuine wit and charm.  This time there is none of that.  We simply drift from pee joke to vomit joke to fart joke with the occasional pause for a homophobic humor.  The film is a lazy, rudderless endeavor that somehow manages to talk down to its audience while still being beneath it.