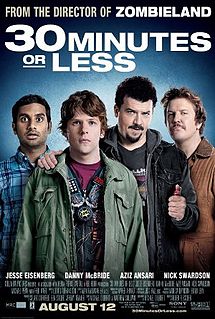 Having seen nearly every romantic comedy that’s come out in the last couple weeks, I needed a break. Not that the rom-coms weren’t good, but I needed a manly movie with violence and women wearing less clothes than a spring break beach.

Enter Danny McBride  and 30 Minutes or Less, a comedy based loosely on a real-life event. After seeing the trailers, I knew this would be a movie what my mom used to call “a Stephen movie,” something that was so dumb it was funny. Naturally, I went first chance I could. I’m pretty happy to say that the film delivered on every front.

Dwayne (McBride, known to most as Kenny Powers from the show “Eastbound and Down”) is pretty much a loser in every sense of the word. He has no job, no bright future, just a loyal companion, Travis (Nick Swardson), an earnest friend who maintains a bit of morality even if Dwayne doesn’t. Dwayne’s father (Fred Ward) is a veteran Marine who happened to win the lottery after he was discharged from the Corps. He is hard on his son and his lack of ambition. After one particular confrontation, Dwayne retreats to a strip club, where Juicy (Bianca Kajlich) tells him she can put him in touch with a hitman (Michael Peña) to kill his father for $100,000. Liking this idea, Dwayne and Travis decide to abduct someone, strap a bomb to them, and force them to rob a bank for them to get the funds necessary.

On the other side of town, Nick (Jesse Eisenberg) is a pizza deliveryman with no foreseeable future. In his mid-20’s, he has trouble getting to his deliveries on time (in 30 minutes or less, hence the title of the film). His best friend Chet (Aziz Ansari) is a school teacher whose sister (Dilshad Vadsaria) Nick is secretly in love with.

The evening before the heist, Dwayne and Travis order a pizza and kidnap Nick, rendering him unconscious. When he comes to, the bomb is attached to him and the plot is revealed. Nick’s first stop is to the school Chet is teaching at to enlist his aid, which Chet reluctantly agrees to.

I cannot give enough praise to Aziz, as he is easily the highlight of the film. Anyone who’s watched the show “Parks and Recreation” will immediately recognize him, and he’s at the top of his game in this film. His lines are delivered smoothly, and he’s the perfect sidekick. Eisenberg does well as the understandably terrified protagonist, trying to find courage in what would normally be a pants-soiling situation for many.

McBride plays a solid a-hole who appears to be completely self-centered throughout most of the film. Driven by the promise of his father’s inheritance, he puts the well-being of everyone else secondary to his objective.

The dialogue is hilarious throughout. There aren’t really any total gross-out moments, which have the tendency to turn off the older crowd, but the conversations do tend to appeal to the younger crowd.

As mentioned above, the film is based loosely on a real event, when Brian Wells was forced to rob a bank with a bomb attached to him after claiming he was abducted. In his case, the ending was grisly, as the bomb detonated after he was arrested. Incidentally, it was later found out that he was actually involved in the plotting of the heist, but was under the impression the bomb would be fake. When he found out the bomb was real, he tried to back out but was forced to go through with it.

The question has been raised as to how much the writers/producers knew about the real incident and whether a movie should have been made. While I am sympathetic to the Wells family, as this film has once again put them into the public eye due to an unfortunate event, using a real-life event as the basis for entertainment is nothing new (hello, “Law & Order”). Granted, most of the time the situations are portrayed in a more serious light, but…well, it’s a movie.

Were the film portraying Wells in a completely negative light, perhaps I’d see the film differently. As it is, the film might borrow from the setup, but veers in a dramatically different direction from what happened in real life. Were people to accede to the extreme sensitivities of audiences everywhere, there would literally be no comedies at all.

This film won’t win any awards and most likely won’t be remembered far down the road, but as it is, it’s a funny summer movie for people to see to turn their minds off for 83 minutes. Audiences in their late teens to 30’s will most likely enjoy the movie more than others, but it’s still a solidly entertaining film for anyone.