Another Take By Zac: Film Review: Another Earth 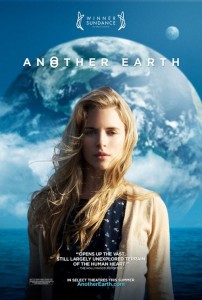 Another Earth is low budget sci-fi that gives a bit twisted look at guilt, an interesting hook and philosophical grounding that works extremely well for the drama of the film.

The trailer for the film sells the other Earth concept as the focus of the picture, but it is really a background element to the true story.  That story is the focus on Rhoda and John as they reconnect years after an incident that will always bind the two together.  To get into their relationship would be a bit too spoilery, but it starts out of tragedy, grows over sympathy, and an inconceivable bond is formed between the two.  The sci-fi elements are pretty well thought out though, as the mystery surrounding Earth II unfolds parallel to our characters story.  The planet is discovered when its radio frequencies are picked up on our Earth and over four years it kept getting closer and closer.  We soon discover it is a geographic copy of our own Earth and a private company has planned an exploration of the planet with one free civilian seat up for raffle.  Rhoda is trying to win the spot through her story and after what she goes through you can imagine why she would want to leave this Earth.

The film moves along at a deliberate pace but I never found myself bored.  The character of Rhoda is engaging and sad with Brit Marling knocking it out of the park in the lead role.  Rhoda goes through a lot at a very young age, relatively, and Marling captures it perfectly.  The way she finds herself in John’s life again is entirely believable and her and William Mapother work great off one another.  The surprising turn the film takes between the two works do to their relationship and these two have no problem carrying the picture.  Mapother is known for his work on Lost but he does a fine job here as a depressed man slowly coming back to life.  It is also great to see Kumar Pallana again in something and he makes quite the impact in only a few brief scenes.

The sci-fi elements of the film are just as engaging as the film’s central relationship but I do wish we could have gotten even more into it.  The idea of another Earth showing up with a world that is the same as ours is incredibly intriguing and I feel like the film could have explored the possibilities even further.  You can argue this leaves less to the viewer to ponder but the idea is a nearly endless trove of possibilities that I would like to have seen Mike Cahill and Marling’s (the writers of the film) thoughts on the possibilities of this scenario.  The effects work and photography of the film are also quite beautiful and amazing on the small budget with Cahill (also the director) delivering my favorite shot of the year so far; I think.

In the end, Another Earth is a fine little piece of sci-fi independent filmmaking that is a coming out party for Brit Marling.  She is fantastic in the lead role and sells this picture which is being sold to you as something else.  The sci-fi elements of the film are extremely intriguing, if a bit underdeveloped, and the way the film’s third act unfolds is just a great and natural wrap up to the film.  There is a possibility of a bit of frustration with a reveal very, very late in the film, but I think it leaves the film open with a very solid mystery to what it means.  Mike Cahill has crafted a fine feature debut and hopefully by the time his next one comes out Marling will be a big star, she deserves to be.

Another Earth is a B+