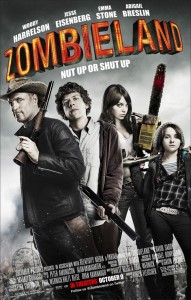 In a world that is overrun with zombies, an unlikely duo joins forces to make the best out of their situation in this incredibly fresh buddy comedy. At every turn, you cant help but to see cars destroyed, buildings abandoned, and worse yet – zombies that want nothing more to exterminate the entire human population. Welcome to “Zombieland.”

The movie is cleverly narrated by Columbus, played by Jesse Eisenberg – who explains why the world is now overrun by zombies. Out of necessity for survival, he has developed his own list of rules that has allowed him to become one of the last human beings on earth. We find that this list is referenced throughout the entire movie, which is done in a way that is more and more entertaining as the story goes on. We learn early on about this unlikely hero and how a skinny, quiet guy (who could stay at home for weeks on end without any human interaction before the zombie outbreak) came to survive in the beginning.

As the story progresses, Columbus heads home to find out if the little family that he barely even knows is still alive. On the way, we are introduced to the closest thing that he can call a friend – a fellow survivor that has a certain affinity for killing zombies. We find that Tallahassee, played by Woody Harrelson and denoted by the destination city of his character, holds a particular distaste for zombies and shows no mercy when it comes to killing them in whatever way possible. His seriousness and commitment to destroying zombies is one of the most entertaining parts of the film. The buddy dynamic between these two main characters is what makes the movie so enjoyable. The unlikely friends decide to team up and work together to get to where they are both going. And so starts the beginning of a beautiful zombie-killing friendship.

Both Columbus and Tallahassee are longing for something throughout the movie. Columbus has never really been the social type, and would love nothing more than to meet a girl that he could settle down with and bring home to meet his parents. He has in his mind the perfect way that his relationship would play out, and now is finding it even harder to meet the girl of his dreams while most of the entire population has been wiped out by zombies. Tallahassee on the other hand, is craving something else in his life. He knows that somewhere in the world, eventually will exist the last Twinkie on earth – and he wants to be the one to eat it. Along their journey, the two of them get into some hilarious situations looking for their objects of desire.

Jesse Eisenberg was cast perfectly in the role of our a-stereotypical hero. Most zombie movies portray a hero who is a typical bad-ass type, muscle bound and ready to pound some zombies into smithereens. Columbus on the other hand uses his intelligence, and his incredibly amusing list of survival rules to stay alive. His unlikeliness to survive a zombie outbreak, due to his small size and stature, is what makes the movie so entertaining. He plays a zombie-killer that has never been seen before, and it is done very well in this film. Woody Harrelson is perfect in the role of Tallahassee, who is an incredibly fun character. He is what levels out the dry sense of humor and quiet personality of Columbus, and is sure to entertain with his over-the-top, good ol’ boy zombie-destroying antics. The two run into fellow survivors Whichita (Emma Stone, “Superbad”) and her younger sister Little Rock (newcomer Abigail Breslin) after a run-in with some zombies at a grocery store. The two of them do a good job in their roles opposite the guys, although I thought that the interactions between Breslin’s character and both Columbus and Tallahassee proved to be more entertaining. This was mainly due to her young age, and the fact that this 12-year-old girl is out there killing zombies with the big boys. Overall, the entire cast is a whole lot of fun, and each brings something different to the film that makes it great.

The humor is dead on through the entirety of the film (pun intended). It is hard to find a moment where the audience is not entertained by the hilarious tactics that the characters ensue, as they try to survive in world overran by zombies. The movie is unlike any other zombie move that has been made before – even in the comedy genre. The execution of non-stop humor and the wittiness of the script is what makes the movie a perfection. Overall, the movie is nothing but fun and entertainment – and one of the best times you will have at the theater all year.

Zombieland is an A