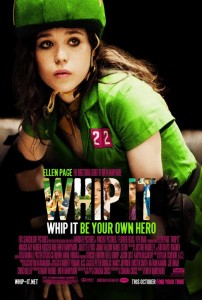 Drew Barrymore’s hard-hitting directorial debut shows us that she is one tough chick, and isn’t afraid to get her hands dirty. Her passion for this project shines not only from behind the camera, but in front of it as well – as she plays roller derby tough-girl Smashly Simpson. Put together a superb cast, clever script, and some of the baddest women on 8 wheels – and you get “Whip It.”

Bliss Cavendar (Ellen Page) lives in the small town of Bodeen, Texas. She seems like any average high school student; working as a waitress at the local diner and hanging out with her best friend Pash (Alia Shawkat) in her free time. Her mother Brook (Marcia Gay Harden) is a former Bodeen beauty pageant contestant, and wants nothing more than for her daughter to follow in her footsteps. But Bliss is bored with her small town life, and wants something more.

One day while buying some new shoes with her mom and little sister, three girls on roller skates come making a scene while skating through the store. They drop off a stack of flyers, and leave as quickly as they appeared. Having caught the attention of Bliss, she grabs one of the advertisements for the roller derby in Austin and instantly knew that it was something she needed to see. So her and Pash put together a story about going to see an away football game, and sneak off for a night of excitement at the warehouse where the derby takes place. By the end of the night, Bliss has some new heroes. And little did she know that they would invite her to try out for their team, the Hurl Scouts. Reluctant at first, Bliss can’t find a good enough reason not to try out for the team. And so, Babe Ruthless was born.

One of the reasons that this movie works so well is because of the casting. It is hard to find a problem with almost any of the actors in the film. It is refreshing to see Ellen Page in the roll of rebellious, yet down to earth teenager Bliss Cavendar. I think that most people still see her as the clever-witted Juno when they think of her. Yet Page’s performance in WHIP IT, although a complete 180 from her aforementioned role, feels rather comfortable and is very well done. Her best friend Pash (Alia Shawkat, best known for her role as Maybe on “Arrested Development”) provides much of the comedy throughout the film, and portrays a more than worthy best friend. Bliss’ parents were both great; her dad being played by Daniel Stern and mom by Marcia Gay Harden. Stern plays the lovable, goofball dad who always sides with his little girl. Marcia Gay Harden does an excellent job, as she exhibits a huge range of emotions throughout the film. She tries and live vicariously through her daughter – giving her the love and support that she never had, and that she thinks is best for Bliss.

Now to get to the Roller Derby teams. There are so many well known actors that comprise the skaters we see during the movie, and the choices were dead on. The “Hurl Scouts” are comprised of Maggie Mayhem (Kristen Wiig, “SNL”), Bloody Holly (Zoe Bell, “Death Proof”), Rosa Sparks (Eve), Smashley Simpson (Drew Barrymore), and the Manson Sisters (Rachel Piplica and Kristen Adolfi, who skate for the Los Angeles Derby Dolls in real life). Kristen Wiig is hilarious in the film, and is one of the most enjoyable characters. She gets the best lines – true to her comedic talent that shines on SNL. One of my surprise favorites was Drew Barrymore’s character – Smashly Simpson. She gave herself a perfect character to play, and doesn’t make the mistake that some director / actors do of giving themselves a role that isn’t fitting. Smashly doesn’t take crap from anyone, and isn’t afraid to get kicked out of a game. Actually, I think she aims for it. The only other skater that really stands out is Iron Maven – played by Juliette Lewis. She is the mean girl who wants nothing more than to ruin the dreams of newcomer Babe Ruthless. They have a great back-and-forth dynamic that keeps things interesting on and off the track.

In the end, WHIP IT is a fun movie that has enough action and comedy to keep things interesting throughout. Drew Barrymore does an excellent job with her first directing credit, and is sure to be back in the director’s chair soon. The film puts the roller derby on the map, and is sure to make most of the audience interested in going to the next derby they can find. With a great cast to backup a well written story, the film is sure to entertain.

WHIP IT gets a B+ 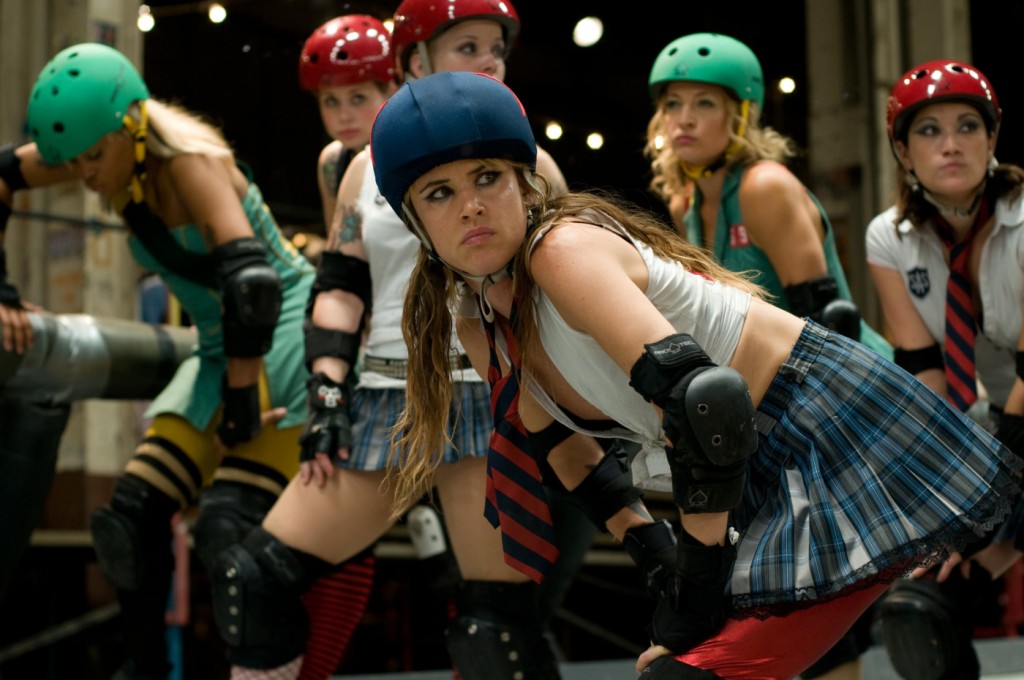 Another Take by Zac:

Drew Barrymore’s directorial debut is a fun, humorous, and uplifting tale that appeals to all audiences with its themes about being yourself and not bashing anyone along the way and it is about as fun as a movie can get when it is firing on all cylinders.

Bliss Cavendar is a seventeen year old girl living under the tutelage of her mother in the world of beauty pageants and is quickly growing disinterested with the whole thing. Growing more and more into her own, Bliss is looking for something more up her ally. Not full of her self and never trying to set a trend, she is a quiet and gentle outsider when it comes to school but while visiting Austin she sees a group of roller derby girls promoting an event and quickly takes an interest to the sport. With her best friend Pash, the two head out for the big city to catch the event and Bliss becomes an enthralled by the event that unfolds. Upon discovering there are open tryouts for the league in a few weeks time, Bliss decides to bust out her old skates and start training to hopefully make a team. After a rough try out, her speed finds her a spot on the The Hurl Scouts with teammate like Maggie Mayhem, Smashley Simpson, Rosa Sparks, and Bloody Holly. Having to keep this world secret from her mom she leads a second life as a roller derby girl and even finds romance in a fan of the sport that helps her further discover herself.

The film from here becomes one part sports movie, one part young romance, one part fighting for what you believe in and Barrymore does a very find job of making them all gel together. Now, I will say, the roller derby stuff and anything involved around the teams and events are the best parts of the film by far. Bliss comes out of her shell and the supporting cast is fantastic from top to bottom. The laughs are also the most ferocious here and the action is fun, fast paced, and extremely well done. The film captures the fun and atmosphere of a roller derby so well that you can’t help but want to go out and watch a real event after you walk out of the film. The romance portion of the film is the weakest, but that is more or less because there isn’t quite a lot to it. Girl meets boy, start hanging out, sparks fly, and things get good. This subplot is definitely secondary but it does allow us to see another side of Bliss and delivers one of the cooler scenes in the movie; hint: it involves a pool. The last thread was the most delicate and is handled about as perfectly as you can imagine. Obviously the mother is going to find out and disapprove of things and you have the expected yelling scene of disapproval, but where the film shines is its handling of the aftermath. It could have taken the whole, mom’s evil she will never understand route, but Bliss gets advice from the most unlikely source on how you should view your parents and the results are some touching mother daughter scenes that you don’t really get in films very much nowadays.

But the film does mostly stick with the derbies for the most part and showcasing the eccentric characters in and around the world. The action is a lot of fun and the humor plentiful and you will find yourself biting with anticipation for the next scene. Luckily Barrymore doesn’t ever make you wait long and concocts some really wild and fun characters to surround Bliss in the film.

Ellen Page stars as Bliss and does a fine job at creating a quiet girl that can bust in and out of her shell when necessary and opens her heart when she has to as well. She handles the small scenes and the action scenes extremely well and is a strong lead for the picture that nails the part. Page is the straight man, for the most part, throughout the picture while everyone else gets to be a little crazy and over the top around her. Kristen Wiig is great as usual as Maggie Mayhem but she is the most down to earth of the group off the rink and becomes a good friend to Bliss over the course of the film. Drew Barrymore is also quite silly and good as Smashley Simpson, a dimmer and ADD riddled hard ass that is getting tossed out of games left and right. Juliette Lewis is also nasty and a lot of fun as the film antagonist and resident star of the derby league. Lewis’ character Iron Maven is a bit of a bitch but there is still this over ridding togetherness to the league that creates these weird bonds among all the athletes so you never get a complete villain feel from the character, which is good. Andrew Wilson and Jimmy Fallon provided the most laughs in the film as Coach Razor and the resident rink announcer respectively, and there simply wasn’t enough of these two in the picture. Marcia Gay Harden is great as always as Bliss’ mom and she shows a deft range and puts a nice fresh spin on the overbearing mom by giving her an underlying edge. Daniel Stern is also quite good as Bliss’ father and he slowly gets more and more to do as the film roles on, culminating in some great bits in which he nails. Alia Shawkat also stars as Pash and is a bit over the top but still fits in the spirit of the film though she does miss a couple of times as on her comedy beats, but oh well she still does a nice job.

In the end, Whip It is a fun sports film that both girls and guys will enjoy and has a lot of fresh ideas going for it. Be it the wicked action of the sport, the alternative coming of age tale, or the grand ole time the film is having and the feeling of fun popping out of the screen it is hard not to get swept up in the film. The movie is all at once a bit to conventional with its structure but at the same time will surprise you with fresh bits and pieces along the way, especially with a great portrayal of a mother/daughter relationship. With all this said, Whip It, is one of the most fun films of the year as well as one of the funniest and you should show no hesitation this weekend when heading out to see this one.