‘Yo Gabba Gabba! Live!: It’s Time to Dance’ Gets St. Louis Dancing at the Fox Theatre! 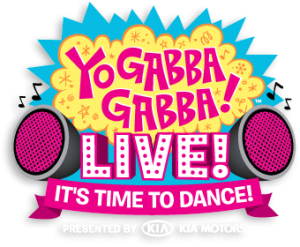 Those three words are just a few of the many that can be used to describe what I believe to be one of the most fun live shows in existence. I have been to many concerts over the years, but I can honestly say that the energy and showmanship put into Yo Gabba Gabba! Live! is some of the best that I have ever seen.

Going into the show, I had plenty of exposure to Yo Gabba Gabba! My two year old son watches it religiously. When he wakes up in the morning: “Yo Gabba Gabba!” When he is eating dinner, he says, “Yo Gabba Gabba!” Whenever, wherever – it’s his show of choice. So when I heard there was a live show coming to town, I leaped at the opportunity to bring him and review it. From what I know of the show, being one of the most creative and modern kid’s shows on TV, I knew it was going to be a lot of fun. But I had no idea that it was going to be such a blast!

The stage setup is really cool. There is an array of lights bordering the stage, that flash and change colors throughout the performance. The lighting setup rivals that of many of the big live shows I’ve been to around town. Then the background that stretches across the entire width of the Fox Theatre’s stage is a huge HD LED screen. This provides so much more interaction for the crowd and characters than I would have expected, as I imagined that it would be the 4-layered backdrop that we all know and love from the show. This way they can cut between videos, similar to the ones they show during the show, as well as change their backgrounds during the different songs. Everything is choreographed and in sync perfectly with the music, which keep things interesting from beginning to end. 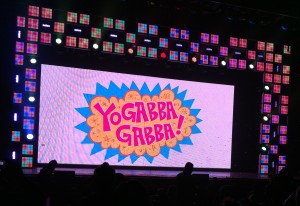 Yo Gabba Gabba! Live! started out in a similar fashion to how television show does. DJ Lance Rock walks on-screen, dressed in his finest trademark Orange outfit, and starts talking to the audience. From here, every kid in the audience has their dream come true when their favorite host bursts out of a door in the screen, and Yo Gabba Gabba! comes to life before their very eyes. DJ Lance Rock has the audience yell the three magic words and the screen opens, revealing the stars of the show: Brobee, Muno, Plex, Foofa, and Toodee. The opening theme song to the show follows, as each of them awakens – singing and dancing around the stage. At this point, as I look across the packed Fox Theatre, I see thousands of fans – young and old – on their feet, singing and dancing along with the characters. The energy and fun doesn’t die down for the next hour-and-a-half, until the theatre clears out. 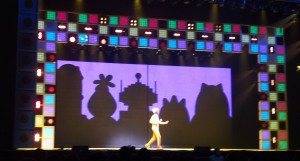 I heard of the favorites that I knew so well throughout the show , and heard some new ones too. What I love is that many of the songs, segments and guests of the TV show are at the live performance as well. It really makes the experience enjoyable for the kids who have every line, and every dance move memorized. The songs and music are so good, that it wasn’t until I saw the show that I realized that I have most of them memorized. Just hearing them in the background, as my son watches the show every day, is enough to get the catchy tunes and lyrics locked into memory. And seeing them performed live was a great experience as well. 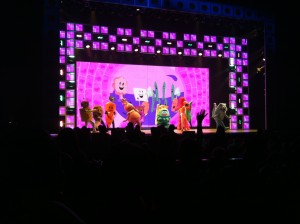 The Yo Gabba Gabba! Live! show is so bright and colorful!

DJ Lance Rock, who we are proud to have as a native St. Louisan, gives it his all during the performance. He is the one that keeps the show moving, from one number to the next, and never does he seem like he is tired of being there. He is like the Energizer Bunny in human form. His spirit and energy is refreshing, and he kept the crowd interacting from beginning to end. I can honestly say that I couldn’t think of a better man for the job.

The dancing and choreography with the music, along with the constantly changing graphics and video going on behind the characters, work so well together. There was never too much going on at once, or what appeared to be any confusion on stage with all of the actors. Some shows don’t translate from the small screen as well as you would hope, but this show is a home run. At first I was worried that my 2-year-old wouldn’t be able to sit still for an hour-and-a-half, but once I saw his gaze fixed upon the colorful cast – I knew it was going to be a good night.

I can’t remember taking my son to a show where we have both had so much fun. The music, dancing and overall feel of the evening was out of this world. The creative minds who have invented such an amazing children’s program have done it again with the live performances. There was never a time during the hour-and-a-half run time that I felt like it was dragging. As I looked around me, there wasn’t a person in the audience – young or old – that looked like they weren’t having fun. If your kids love Yo Gabba Gabba!, make sure to bring them to the show when it comes through town. They won’t be disappointed – and neither will you.

For more information about the Yo Gabba Gabba! Live! tour, visit the official website at yogabbagabbalive.com. 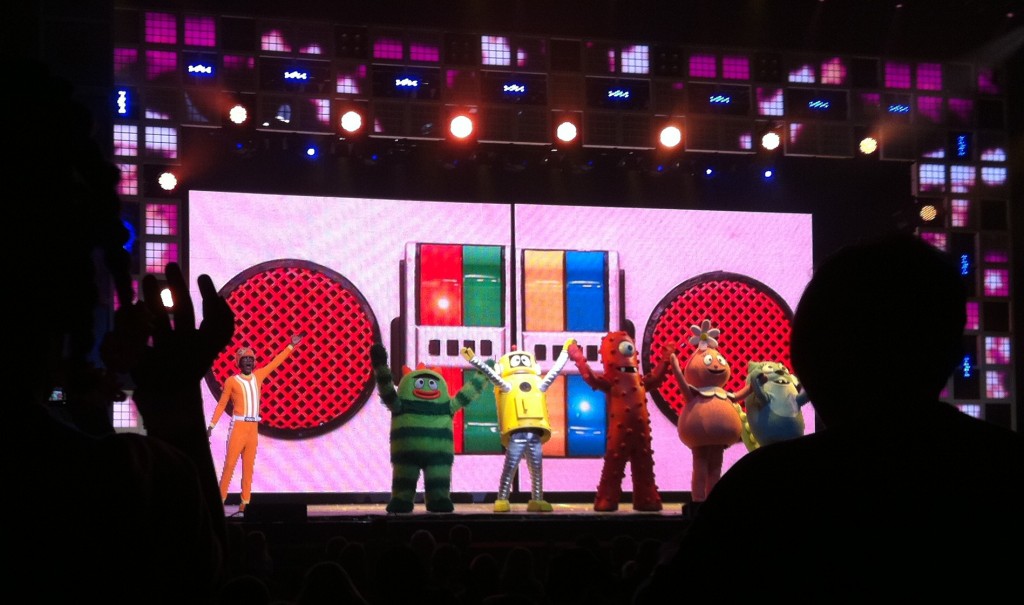