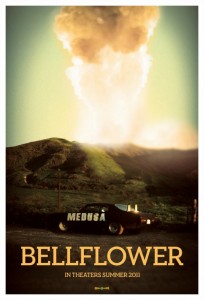 Bellflower is an impressive technical feat, made for only 17,000 dollars, with an interesting look that sadly burns almost its entire, well earned, good will by the end by going completely off the rails.

Bellflower is the baby of Evan Glodell who directs, writes, stars, produces, edits and does the special effects for the film and I am intrigued to see what he does down the road.  This film follows Glodell’s character Woodrow and his best friend Aiden as they build flame throwers and post-apocalyptic ready muscle cars as they dream/ready themselves for their lives after the apocalypse.  The world that the film takes place in though is no where near the apocalypse though and the two come across as bit of immature mad scientists.  But when Woodrow meets a girl, Milly, at the bar one night, the two set off on quite the adventurous first date which spurs a romance between the two.  Back in LA, Aiden connects with Milly’s friend Courtney and the group carries on swimmingly until it doesn’t; and that is where shit hits the fan.

The film starts off quite well with Aiden and Woodrow being a pair of interesting characters to follow around, they do make homemade flamethrowers, and the Milly/Woodrow courtship feels very natural and is engaging.  In fact, for half the movie, things unfold quite naturally and Glodell does a fine job of creating a believable representation of this world these characters live in.  From the parties, the jack-ass attitudes, the building of post-apocalyptic weaponry, and the eventual crumbling of the core relationships, I bought into all of it and was enjoying wondering where this was going to go.  They allude to some insanity to come in the opening of the film, and with the apocalyptic themes Woodrow and Aiden adore it keeps you intrigued, but where Glodell takes us ruins the movie substantially.

I don’t know the last time a third act killed so much good faith I had in a movie.  I sat there wondering what the fuck was going on and where the hell this was coming from.

The character of Woodrow goes off by making a complete 180, going from being the nicest and most relatable character of the film, to a terror of unbelievable proportions; and it is all over a woman.  The insanity and crazy ass shit that the third act devolves into is alright in hindsight, it is actually kind of an interesting twist once you get to the end of the picture.  The problem is the whole time it takes to get to the end you are just slapping your face thinking, ‘what the fuck,’ and I found myself squirming for this ridiculousness to stop.  While the ending does redeem a lot of the ‘what the fuck,’ I still have major issues with characters overreacting so obscenely because they liked a boy or girl.  And the violence that comes with it has no basis; other than allusions to post-apocalyptic worlds.  Nothing in the film validates anyone would act this way, think characters would act the way they do, or that these characters would want to impose such physical harm to anyone.  (These next few sentences are going to be extra confusing since I don’t want to spoil.) Even though the film does try to validate these scenes in the end with their origin, I don’t think Glodell comes close to validating it, especially through Woodrow.  I am not saying Glodell doesn’t do a good job as Woodrow, I am saying that he fails to show that the character has this in him. And one last note on the third act, that person shooting themselves over the opposite sex liking someone else is almost laughable/enraging, almost leading me to just turning the movie off. (End of confusion, hopefully.)

The film does have some bright spots though beyond the aforementioned compliments a couple paragraphs up.  The unknown cast of Glodell, Wiseman, Tyler Dawson, Rebekah Brandes, and Vincent Grashaw is solid and believable in the early goings and do a great job of making the film work as well as it does early on.  The look of the film is incredibly unique as well and Glodell’s technical chops can not be argued with.  The creativity displayed in the films gadgets, cars, and flamethrowers is pretty cool and I wish the film’s script carried that same level of logical creativity.  The slow-mo shots of Medusa, the boys’ post-apocalyptic car, are fantastic as well and maintains the level of raw, tad unpolished, charm of the look of the film.  Glodell is someone I am going to keep an eye on, even if I despised the third act of his film while watching it.

In the end, Bellflower is a mixed bag.  It is a triumph of independent filmmaking and a real showcase for a future film talent.  That said, the film’s narrative shortcomings and insane explorations go too far and can’t be saved by the film’s failsafe.  I hate the final act less now than I did while watching it, but it is going to take me a while to want to sit back and watch this one again.  I did quite admire at least the first half of this film, but bridges were burned in the last act.  Glodell will get many more chances though I am sure, and he deserves them, let’s just hope he reigns in or validates his crazy next time he gets behind his camera.

Bellflower is a D+