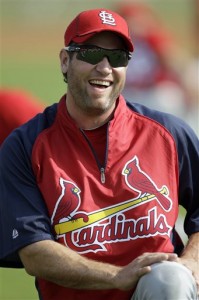 101.1 ESPN Radio is reporting that the St. Louis Cardinals have re-signed Lance Berkman to a one-year deal for $12 million.

I’ll admit, I was a bit hesitant when I heard last winter the team had signed Berkman, given his struggles in the previous two seasons. Happily, I was wrong, as after a slow start he began pummeling the ball. His production has slowed slightly in the second half in terms of slugging and driving in runs, but his average has actually increased. Overall this year, he’s hitting .300/.412/.555.

In addition to his production, Berkman’s provided a stabilizing leadership presence for the clubhouse. Should Albert Pujols re-sign, Berkman will be another fortifying bat in the heart of the line-up. If he chooses to go elsewhere, Berkman would likely take over at first, providing Allen Craig a chance to start in right field while Matthew Adams (.300/.357/.566, 32 HR, 101 RBI in 115 games at AA Springfield) spends a season developing at Memphis.

The fact that it’s a one-year deal is remarkable. Berkman could have likely parlayed this year into a two-year deal elsewhere, but he acknowledges that at this point, his career will most likely be a year-to-year analysis, and it also gives the Cardinals a little financial wiggle room for 2013 and beyond. Beyond that, he’s showing that he truly meant what he said when he told the media he wanted to remain in St. Louis more than anything.

Seven games left, 1.5 down. When I get the time, I’ll write a little more about the season and its amazing turn. For now, just enjoy this ride. Could this be Albert’s final homestand as a Cardinal? (I hope not.) Busch Stadium better be rocking with his every at-bat on Sunday. Hell, it should be rocking every game this week.