Well, it was back to the crapper for Monday Night Raw this week. I actually decided to watch it live, rather than DVR it, which made it even worse. There’s something to be said for the ability to be able to fast forward through a lot of the junk the WWE puts on television these days. 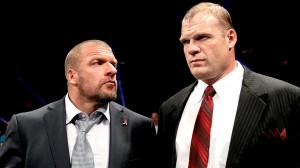 Simply put, the WWE is not good enough to handle a realistic storyline revolving around the legal system, so why try? I don’t know if it was supposed to come off this way, but the Big Show came off as an extortionist and a bully tonight. He wanted his job back, then he wanted money, so what happens? He gets beat down, again. Yes, he will have a title match against Randy Orton, but who really believes that Show will win? I sure as hell do not. The WWE not only destroyed any heat they had going with the Big Show, but also the years of buildup with Kane went right out the window. Wha happened to the monster Kane? Now he is corporate Kane, really? Come on guys, this is one of the lamest storylines in years. He’s not even scary anymore. Kane, or Glen Jacobs as they will probably call him, just looks like a normal guy. 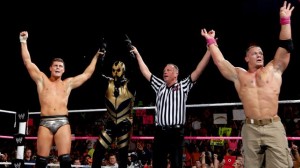 Cody and Dustin Rhodes continue to impress as a tag team. Throw John Cena into the mix, and it was a pretty decent match that the trio had. I am still impressed with Cena returning after such a short time away. The Rhodes brothers are major players in the WWE right now. I hope it stays this way for a while.

My last comment of on Raw is about the Wyatt vs Daniel Bryan vs CM Punk angle. This could be interesting. The fact that Bray Wyatt keeps saying “The devil made me do it,” keeps me thinking someone new is going to show up. Could it be Shane McMahon or Vince? I will keep watching to find out. But, this leads me to my biggest problem with the WWE. The fact that they have buried Daniel Bryan after such a major push boggles my mind. I hate to see it. Bryan could be a great champion, but it seems like the company will not let that happen. His feud with Orton over the last few months seems pointless now. It’s really sad to see the company ignoring what the fans want. Overall, it was a very disappointing episode of Raw this week.